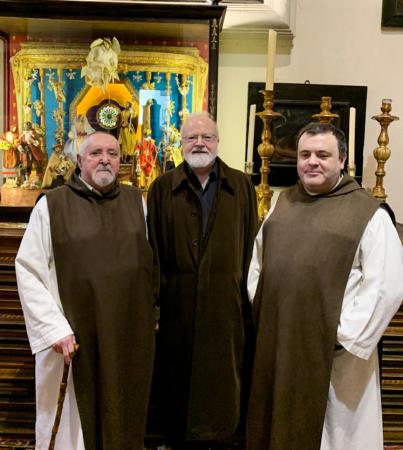 During his time in Spain, Cardinal O'Malley visited the Order of St. Jerome in the city of Segovia. Pilot photo/CardinalSeansBlog.org

The Cardinal Archbishop of Madrid, Carlos Osoro, asked me to address his priests at their annual convocation held at the University of San Damaso this past week. So, following my meetings in Rome, I departed for Spain, but I had two days between the time of my arrival and the beginning of the convocation. So, I took the opportunity to see Father Andres Garcia, who studied at Harvard and was in residence in some of our parishes during the time, and Father Michael Nolan, who was visiting him.

On Sunday, which was the feast of the Presentation of the Lord, we had Mass at Father Andres' church, the Church of St. Edith Stein outside Madrid.

At the Mass, I was very happy to see one of the sisters that I worked with when I was a young priest in Washington, Sister Covadonga -- a Carmelite of Charity of Vedruna.

The Mass was very well attended, including many young families. It was encouraging to see such a vibrant parish in Madrid.

We also visited the Redemptoris Mater Seminary of Madrid.

In the seminary is the tomb of one of the original initiators of the Neocatechumenal Way, Carmen Hernandez.

About three years ago, Carmen went home to God. I was very sorry that I was unable to be at her funeral, but I was happy to have this chance to visit her grave.

We were also free the following day, so Father Andres, Father Michael, and I went to visit the city of Segovia, which is only about 35 miles from Madrid.

Our first stop of the day was at a very ancient medieval church of the Knights Templar called la Iglesia de la Vera Cruz, or the Church of the True Cross. It is now run by the Order of Malta.

We then visited the tomb of St. John of the Cross.

I had not been there since the time I was teaching in Spain at El Escorial, which was an old monastery of the Order of St. Jerome. I thought the order had died out, but I discovered that their last monastery is in Segovia.

So, we visited the monastery of the order.

In the monastery, I was taken by a bench and the motto inscribed on it, "Do whatever he tells you."

We also saw two turtledoves at the monastery, and we joked that, since we had just celebrated the Mass for the Presentation, they would have made nice props!

We also visited the beautiful Cathedral of Segovia, and had lunch with the Bishop of Segovia, Cesar Franco.

On Wednesday was the priest convocation at San Damaso University. Much like our own Presbyteral Convocation, it is an annual event that is part of their ongoing formation. I was among three presenters -- myself, Cardinal Matteo Zuppi of Bologna, and Cardinal Osoro. The theme was "Evangelizing the Great Cities, the New Areopagus." There was great interest in the subject, and the talks were well received by the priests.

San Damaso is a university sponsored by the Archdiocese of Madrid. It is adjacent to the seminary and seminarians take their classes there, but the university is mainly for ongoing formation and preparation of priests, deacons, and lay ministers. It is very much like the way St. John's Seminary also has the Masters of Arts in Ministry program and our diaconate program.

I was very happy to have this opportunity to be in Madrid again. It took me back to the time, many years ago, when I was teaching at El Escorial with Father Lorenzo Albacete and writing my doctoral dissertation on St. John of the Cross and St. Teresa. It was wonderful to be able to see a lot of old friends, as well as meet the priests of Madrid and see the wonderful pastoral work that is being carried out there.