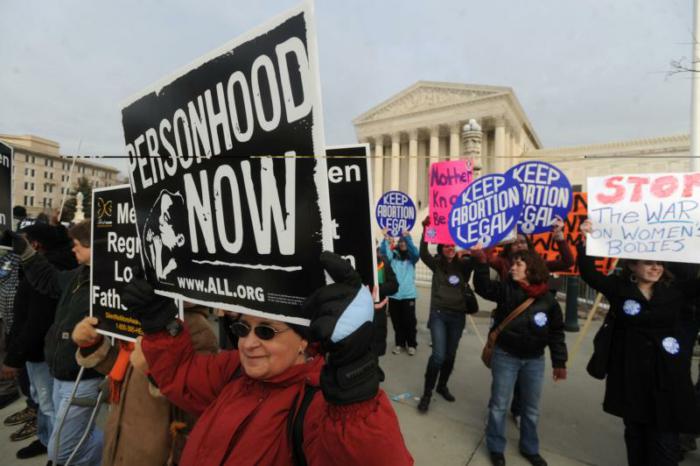 A pro-lifer from Louisiana holds a sign in front of the U.S. Supreme Court building during the 2010 March for Life in Washington. The court will hear oral arguments March 4, 2020, challenging a Louisiana law requiring abortion providers to have admitting privileges at a local hospital. Several organizations have filed briefs on both sides of this case including the U.S. Conference of Catholic Bishops, which supports the state law but has urged the court to reexamine its previous abortion rulings. (CNS photo/Peter Lockley)

WASHINGTON (CNS) -- Strong opinions on both sides of the abortion debate are front and center in the paperwork currently filed with the Supreme Court for its upcoming abortion case.
The case challenges a Louisiana law that requires abortion providers to have admitting privileges at a local hospital. The court also will examine a separate petition by the state that questions if the abortion providers have the legal standing to challenge the state law on behalf of their patients.
The 2014 Louisiana law was upheld last year by a panel of the 5th U.S. Circuit Court of Appeals.
The combined cases: Gee v. June Medical Services and June Medical Services v. Gee will be argued March 4. Rebekah Gee is the secretary of the Louisiana Department of Health and June Medical Services is a Louisiana abortion provider.
More than 70 friend-of-the-court briefs have been filed on both sides of this case with health care professionals, researchers, lawmakers, states, and religious and advocacy groups alike, weighing in.
Catholics groups that filed briefs in support of the state law included: the U.S. Conference of Catholic Bishops, the Thomas More Society and the National Association of Catholic Nurses along with the National Catholic Bioethics Center.
Catholics for Choice joined other religious groups in a brief against the state law saying its restrictions would leave only one doctor at one clinic in the state which would impact the "poorest Louisianans."

Members of Congress filed two briefs on opposing sides.
A group of 207 members of Congress filed a Jan. 2 brief in support of the Louisiana law saying the state clinics are full of safety violations and stressing that this was an opportune time for the court to reconsider its 1973 decision legalizing abortion.
An opposing view was signed by 197 members of Congress in a late December brief challenging the state law and cautioning that efforts to keep it in place it are part of an overall effort to overturn the court's Roe v. Wade decision.
This is the court's first abortion case since Justices Brett Kavanaugh and Neil Gorsuch joined the bench and also without the swing vote of Justice Anthony Kennedy, who retired in 2018.
But this is not the first time the court has looked at this particular case. A year ago, in a 5-4 vote, it temporarily put the law on hold. In a brief order, Justice Samuel Alito said the justices needed more time to review the documentation on arguments for and against the Louisiana law, titled Unsafe Abortion Protection Act.
The Louisiana case is almost identical to a Texas law the court struck down in 2016 that required abortion clinic doctors to have admitting privileges at local hospitals and made state abortion clinics comply with standards of ambulatory surgical centers.
In the Texas case, Whole Woman's Health v. Hellerstedt, the court said the requirements imposed "a substantial burden" on women seeking abortions and were not necessary to protect women's health.
A brief submitted Dec. 30 by the U.S. Conference of Catholic Bishops similarly referred to Whole Woman's Health decision, but it said that case did not follow court precedence and should be overturned. It also noted differences between the two cases -- mainly that the Louisiana law is not causing any clinics to close.
The USCCB brief said the Texas and Louisiana cases involve the same underlying issue and that a decision which distinguishes the two cases without overruling the Texas decision will "likely lead lower courts to attempt to steer a dimly lit middle course between the two decisions."
The brief also addressed the second part of the case -- the abortion providers' right to sue -- and sided with the state, saying the providers "not only fail to be 'close'" to their patients, "but are positively adverse."
"The petitioners have a direct economic interest in avoiding the time and expense to comply with more protective health and safety standards. Their patients, on the other hand, have a clear and obvious interest in their own health and safety," the brief said.
The Justice Department, in a Jan. 2 brief, urged the court to either throw the case out or allow the admitting privileges to stand. Similar to the USCCB brief, it also urged the court to overrule its decision in the Texas case.
It also said the abortion providers didn't have the right to sue the state primarily because they don't have a "close relationship" with patients enabling them to sue on their behalf.
The government's brief said the law's admitting privileges requirement imposes a "minimal" burden on Louisiana women and would improve standards for abortion clinics.
Opponents of the state law who filed briefs with the court included: the American Bar Association, the American College of Obstetricians and Gynecologists, the American Civil Liberties Union and Planned Parenthood Federation of America.
They argued that the law puts an unnecessary restriction on abortion clinics, at a time when there are only three in the state, which then in turn places "undue burden" on women who are seeking an abortion.
The combined brief filed by Jan. 2 by the National Association of Catholic Nurses, the National Catholic Bioethics Center and a group of former abortion providers focused on "potentially serious complications and the risk of death" in abortion procedures and said hospital admitting privileges for abortion providers would provide "continuity of care when complications occur."
The Thomas More Society, based in Chicago, said the case should be dismissed outright because the abortion providers failed to demonstrate legal standing.
In a statement, Andrew Bath, the group's executive vice president and general counsel, said the case could result in an order prohibiting abortion providers from filing suits on behalf of patients against laws "that are sensible safety regulations enacted to protect those very patients from the negligence and incompetence of the abortionists themselves."
- - -
Follow Zimmermann on Twitter: @carolmaczim