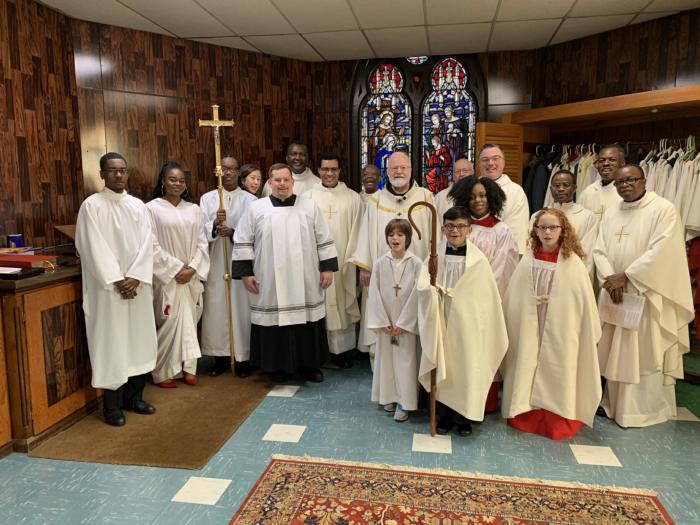 On Thursday, I had dinner with Father Antonio Nardoianni from St. Leonard's Parish in the North End, who announced in December that he would be leaving St. Leonard's and will move on to minister in Canada.

In his 15 years as pastor, he did extraordinary work at St. Leonard's -- renovating the church, helping to bring new life to the parish and providing wonderful pastoral service to the people of the North End. We wish him all the best in his future ministry. He will be fondly remembered and sorely missed by many!

On Friday, I went to The Carmelite Chapel in the Northshore Mall to celebrate a Mass to mark the chapel's 60th anniversary.

The Carmelite Chapel was the first mall chapel in the United States and was an initiative of Cardinal Richard Cushing, who is well known for having established several "workers chapels" around the Boston area. This was a very important initiative to bring the sacraments close to the people where they live and work.

Besides the chapel in the Northshore Mall, he established chapels in the Prudential Center Mall in Boston and the Westgate Mall in Brockton. In addition to that, there are, of course, the Seaport Chapel in South Boston and Our Lady of the Airways Chapel in Logan Airport, which was also the first of its kind.

We are very grateful for the Carmelite Friars' long ministry at the Northshore Mall, and now a new group of Carmelites from India is continuing the wonderful ministry that Father Herb and the American Carmelites carried on for so many years.

The chapel is a great spiritual oasis. So many people go there for Mass, confession, or just to spend time in front of the Blessed Sacrament. We are very grateful to Father Jilson George and the Carmelites of Mary Immaculate who are now staffing the Chapel.

The Carmelites of Mary Immaculate belong to the Syro-Malabar Rite, which, after the Ukrainian Catholic Rite, is the largest Eastern Rite in the Catholic Church and traces its roots back to St. Thomas the Apostle. In fact, when the Portuguese explorers arrived in India, they were very surprised to find that there were already Catholics there, thanks to those who had passed on the faith for many centuries.

We celebrated the Mass there on the feast of St. Kuriakose Elias Chavara, who is the founder of their Carmelite community in India.

Their presence at the chapel is a reminder of the catholicity of the Church and that the Latin Rite is not the only rite of the Church.

On Saturday, I was very happy to join our Ge'ez Rite Catholic community at the cathedral for their celebration of Christmas.

They arranged to have a Capuchin friar from Denver, Father Amlesom Gaim Gawed, come to celebrate the Mass with them.

They have a very interesting liturgy. When they distribute Communion, three people follow the priest -- one holding an umbrella, another with a candle, and another with a bell. (We would need a lot of extraordinary ministers to do that in our Latin Rite Masses!)

After the Mass, they sing Christmas carols.

The staffs in their hands represent the staffs of the shepherds of Bethlehem.

On Sunday, I went to St. Joseph Church in Somerville, for the 150th anniversary of the St. Joseph's community. The Mass was originally scheduled to be held in October but, unfortunately, I was unable to attend because of the Synod on the Amazon.

St. Joseph Church, along with St. Ann's and St. Catherine's, is now part of the recently formed St. Louis and Zelie Martin Parish.

The relics of the saints that the parish recently received were placed in front of the altar for the Mass.

Of course, the pastor, Father Brian McHugh, and leaders of the parish were there with us for the celebration. The Haitian community was also there in very large numbers, so the celebration was bilingual.

Afterwards, there was a very lovely reception for the parishioners.