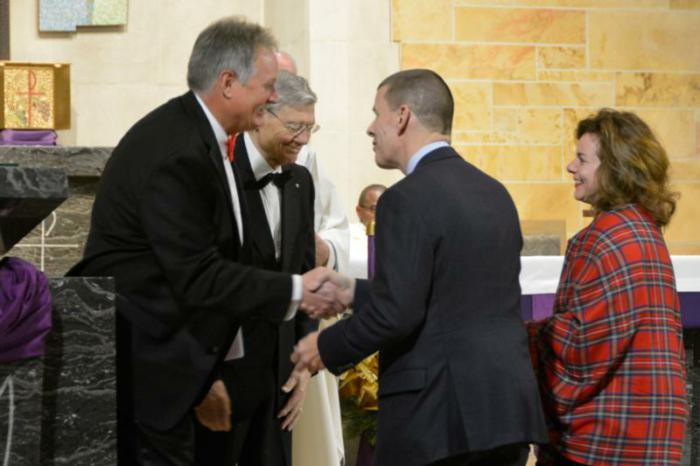 INDIANAPOLIS (CNS) -- When the Indianapolis chapter of Legatus marked its 30th anniversary, Tom Monaghan, founder of Domino's Pizza and Ave Maria University in Florida, was on hand to help members celebrate.

Monaghan, now 82, established Legatus for Catholic business executives and owners over 30 years ago. The organization describes its members as "ambassadors for Christ in the marketplace," and the Indianapolis chapter -- founded Dec. 8, 1989 -- is the fourth oldest Legatus chapter.

"I congratulate you on your 30th anniversary," he said. "I like the number 30. I built my career on 30-minute deliveries."

"Indianapolis is one of my favorite chapters, if not my favorite chapter," Monaghan said, and noted that with nearly 70 active member couples, it also is "one of, if not the, most successful" of Legatus' 98 existing or forming chapters.

The Dec. 12 anniversary event was held during the chapter's annual Christmas celebration Mass and dinner.

The goal of Legatus is "to bring your Catholic faith into your business by your actions and the way you behave and operate your business," said current chapter president Gary Hoefle, founder of Maxim Services LLC.

He and his wife, Katie, are members of St. Luke the Evangelist Parish in Indianapolis.

Members and their spouses are enriched through the organization in multiple ways. Monthly meetings begin with the opportunity for confession, the rosary and Mass, followed by a presentation by local and national Catholic speakers and business executives addressing faith life, family and the workplace.

"There have been some fabulous stories of people almost in desperation with what their dealing with, and their faith got them through," Hoefle told The Criterion, newspaper of the Archdiocese of Indianapolis.

Developing one-on-one, spiritual-based relationships is the role of the men's and women's forums. Groups of up to 12 members gather once a month to pray and to discuss family, business, spiritual and personal concerns from a Catholic perspective.

These forums are "where faith-sharing comes into play" in Legatus, said Hoefle. "All of the members have common challenges. It's not often they have someone they can confide with in their business. It really makes a difference when they have a group in common that they can confide in."

Members also are spiritually enriched through retreats, pilgrimages and conferences.

Legatus was created for "practicing Catholic laymen and laywomen ... CEOs, presidents, managing partners and business owners, with their spouses," who seek "to study, live and spread the Catholic faith in our business, professional and personal lives," according to its website.

This mission is sought "in the love of our Lord Jesus Christ, his church and his vicar on earth" in adherence to the church's magisterium, it says.

As chaplain of the Indianapolis chapter, Msgr. Joseph F. Schaedel, pastor of St. Luke the Evangelist Parish, is tasked with vetting potential members to ensure they are practicing Catholics -- to not be "goes against our message," Hoefle explained.

There also are requirements for membership involving professional titles -- such as CEO, owner, vice president, publisher and more; the number of employees the member is responsible for; and a company's financial volume or value.

"I think the limits are set (by Legatus) to make absolutely certain that the member has the time and financial wherewithal to be an active participant" in terms of dues and other components, said Hoefle.

And while having a philanthropic component might be expected of a group whose members meet such financial requirements, that aspect of the faith is already deeply embedded in the lives and businesses of the members.

"So many of our members and their businesses are solicited for donations and asked to be involved in community and parish leadership," said Hoefle. "And they do give, and they are involved.

"So it's nice to go to an event once a month ... (where) we're just gathered together to continue to grow in our faith with each other and make sure we're going to our businesses in the same fashion."

Hoefle said that spiritually, Legatus has "helped me as a person."

"I have met some very, very faith-filled people who have inspired me through my relationship with the group," he said.

The group is good for couples as well, said Msgr. Schaedel.

"It can strengthen marriages. Since spouses are equal members, (Legatus) also provides at least one night a month for each couple to be together for Mass, a speaker, socializing and dinner," he said.

Beth Leonard is a member with her husband, Bill. She said she and Bill, members of Immaculate Heart of Mary Parish in Indianapolis, have "grown in a way of challenging ourselves in our faith to just grow deeper, using everything we learn through Legatus and the people."

Hoefle noted that now, 30 years after the Indianapolis Legatus chapter was founded, is an especially good time for Catholic business owners and executive professionals to consider joining the organization.

"The other (secular) side is so vocal, almost to the point that they want to extinguish the other side," he noted. "I think, particularly in today's society, it's so important for individuals to feel grounded through faith.

"If you give that image, and you truly believe in what you're doing, your employees are going to get it."

Editor's Note: For more information about Legatus, go to legatus.org.

Hoefer is a reporter at The Criterion, newspaper of the Archdiocese of Indianapolis.