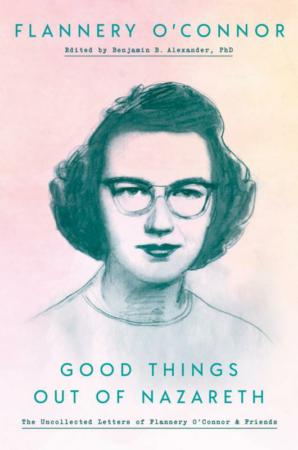 This is the cover of the book "Good Things Out of Nazareth: The Uncollected Letters of Flannery O'Connor & Friends," edited by Benjamin B. Alexander. The book is reviewed by Rachelle Linner. (CNS)

This new book of Flannery O'Connor's letters will, inevitably, beg comparison with "The Habit of Being," the 1979 collection edited by Sally Fitzgerald. One of the pleasures of that book was its length and the leisurely pace that allowed a reader to watch O'Connor's development as a writer, a Catholic and a woman living with illness -- to watch, in other words, her unique vocation taking shape and being lived out. It was informed by Fitzgerald's impeccable scholarship and editorial modesty, her long friendship with O'Connor and her knowledge of the literary circles she moved in.

"Good Things Out of Nazareth" is a different kind of book, although happily the letters are as wonderful as one remembers (some of the ones printed here had been sealed when Fitzgerald was compiling her book). In addition to O'Connor's, this volume includes letters from and among her correspondents -- notably Caroline Gordon, Walker Percy, James McCown, Elizabeth Hester, William Sessions, Katherine Anne Porter and Roslyn Barnes.

We get a deeper sense of O'Connor and her context by reading these letters as well as insights into how others saw her. The correspondence between Father McCown and Barnes is particularly affecting; one can feel their grief after O'Connor's death.

It is a pleasure to listen to O'Connor's unmistakable voice: rich in humor, erudition, literary insight, fortitude in sickness and edifying faith. She was a caring and insightful friend and a sober commentator on literature and Catholicism. She is encouraging to other writers, offering them the same careful advice that she received from the novelist Gordon, her mentor and teacher.

It was Gordon's contention -- and a focus of Alexander's presentation -- that O'Connor was "a rare phenomenon: a Catholic novelist with a real dramatic sense, one who relies more on her technique than her piety."

"The mastery of technique," Alexander argues, "requires the kind of discipline, practice and repetition still observed in music education and athletics; the formation deters what Thomas Aquinas calls 'religiosity.'" Alexander compares O'Connor to Dante, who, he says, "may be the greatest of theological writers because storytelling overrides piety."

O'Connor can be blunt, as with this 1959 comment on liturgical change. "I am one of the laymen who RESIST the congregation yapping out the Mass in English & my reason besides neurotic fear of change ... is that I do not like the raw sound of the human voice in unison unless it is under the discipline of music." She was opinionated -- dismissive of Dorothy Day and the Catholic Worker and archly critical of John Howard Griffin's "Black Like Me." O'Connor supported her friends' civil rights activism but was herself a person of her time and place.

Alexander ably argues -- and the letters show -- that Flannery O'Connor was an exceptional apologist and an excellent spiritual guide. But she died in 1964 and some of what she wrote reveals the particularities of her (and her correspondents') time and place. For example, there are gratuitous anti-Protestant comments in Gordon's letters from the 1950s. Gordon was a convert to Catholicism writing before Vatican II, so she can be forgiven these anachronistic notes. Alexander is also a convert, but a more recent one, who seems not to have forgiven the Episcopal Church for failing him in his spiritual journey.

Alexander takes every opportunity he can to tether O'Connor's eloquence into a cudgel to be used against things he dislikes. He can't seem to resist an opportunity to go off on tangents of chiding and didactic commentary. He is condescending about creative writing classes, "a forum for (students) to express feelings and not study the writing skills of the masters."

He is critical about how history is presented -- "The American story looks different ... when the narrative originates in the pre-colonial appearance of Our Lady of Guadalupe" rather than the British colonies. He complains about "sloppy, partisan journalism" that creates confusion about "the massive sufferings and cruelties" of communism. He contrasts Day's criticism of capitalism and entrepreneurship with "O'Connor's admonitions ... (that) present economic and historical truths that can now be rediscovered at a time when the statist redistribution of wealth couches itself as something new, as if it had not been tried in the recent past."

This book is worth reading because it is always wonderful to hear O'Connor's voice. But the reader should follow the advice given in 12-step programs to "take what you need and leave the rest." Take the letters and leave the commentary.

Linner, a spiritual director, freelance writer and reviewer, has a master's degree in theology from Weston Jesuit School of Theology.