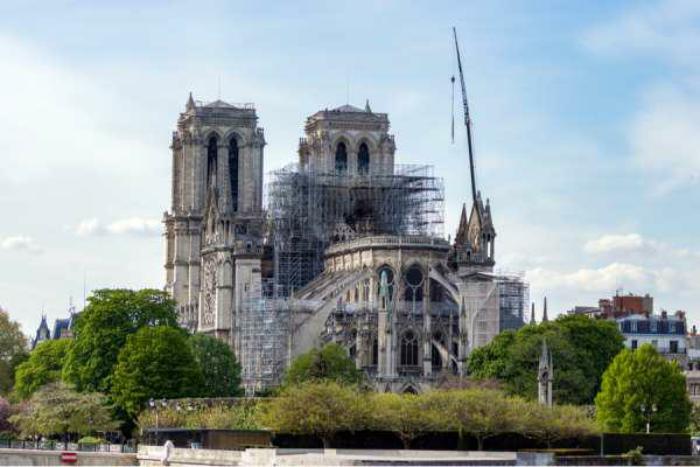 Notre Dame Cathedral in Paris the day after a massive fire damaged parts of the roof and structure. Photo credit: UlyssePixel Shutterstock

Paris, France, Nov 15, 2019 CNA.- Tensions are reportedly running high between French authorities overseeing the rebuilding of Notre-Dame Cathedral in Paris, as they create plans to rebuild the church damaged by fire earlier this year.

Army General Jean-Louis Georgelin and the architect on the project, Philippe Villeneuve, disagree over whether the cathedral's new spire should look modern or medieval, the BBC reports.

Georgelin, at a meeting of the French National Assembly's cultural affairs committee late Wednesday, reportedly told the architect that he should “shut his mouth” over the spire’s design, adding that a final decision on the spire would be settled on in 2021.

The roof of the 850-year-old cathedral caught fire April 15, destroying the building’s spire and most of the roof. The stone vaults survived mostly intact, as did most of the cathedral’s artwork and relics.

Villeneuve has said previously that the only way French President Emmanuel Macron’s ambitious five-year restoration deadline can be met is if the spire is a replica of the one that burned, the BBC says.

Villenueve has expressed concern about the integrity of the structure’s stonework. In July, temperatures in Paris reached 108.7 degrees Fahrenheit (42.6 C), the highest ever recorded in the city, which Villenueve said combined with the water damage sustained during the firefighting effort could weaken the joints and masonry of the stone vaults.

France's parliament over the summer passed a bill declaring that Notre-Dame must be rebuilt exactly the way it was prior to the fire. Supporters from around the world have pledged nearly a billion euros to date to aid in the church’s reconstruction.

Before the fire, officials had been in the process of a massive fundraising effort to renovate the cathedral against centuries of decay, pollution, and an inundation of visitors. French conservationists and the archdiocese announced in 2017 that the renovations needed for the building’s structural integrity could cost as much as $112 million to complete.

The cause of the fire at Notre-Dame is still undetermined. On June 15, Mass was celebrated atone of the side altars for the first time since the fire.