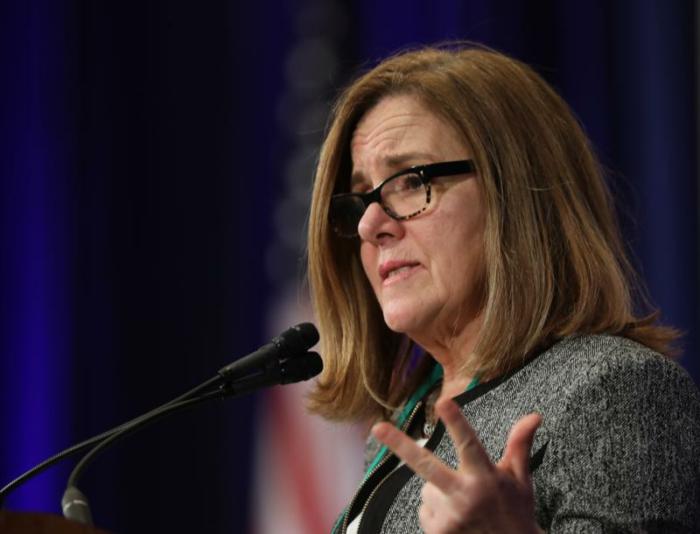 BALTIMORE (CNS) -- The executive director of the Catholic Legal Immigration Network, known as CLINIC, told U.S. Catholic bishops Nov. 13 that the government is violating international and U.S. law when it denies asylum-seekers at the border entry into the U.S.

Yet, some 60,000 men, women and children are forced to wait in Mexico for months, said Anna Gallagher in addressing the bishops' fall general assembly in Baltimore.

Gallagher spoke of her experience as the daughter of immigrants from Ireland who arrived, much like those at the border, "with next to nothing." Even so, she told the bishops, "my parents arrived with many resources: hard work, faith, resilience, and a deep respect for family and community."

But today, she sees a different U.S. than the one her parents entered, she said.

When she took a trip to the border prior to starting her new position at CLINIC, "I saw a world that is hard to understand and accept, given our country's resources and values," she said.

She spoke of an experience at the border seeing crowded shelters without adequate food and sanitary services and meeting migrants who had faced a variety of travails, including beatings and abuse and one who almost had a child kidnapped in a street in Tijuana, Mexico.

"Even with my long experience, I had never seen misery and desperation like that experienced by the thousands of migrant men, women and children asylum-seekers living at our southern border," she said.

She thanked the bishops for having the "foresight and wisdom to create CLINIC," the nonprofit, legal services corporation founded by the U.S. Catholic bishops in 1988 to serve as a national support and resource center for dioceses in providing immigration services.

Gallagher urged bishops to visit local CLINIC affiliates, saying "your presence will lift their spirits as they continue swimming against the tide," and to speak out in favor of migrants so that "your community knows that you are there to accompany them in their often-agonizing immigration struggle."

She also told of a new project by the organization called "Estamos Unidos Asylum Project," or "We Are United Asylum Project," which seeks to respond to the "urgent legal needs of those stranded in Mexico, due to a U.S. policy that keeps asylum-seekers there."

She also informed them that CLINIC, along with HIAS, the Hebrew Immigrant Aid Society, were the only organizations "providing ongoing U.S. asylum assistance" to migrants in Ciudad Juarez, Mexico, across the border from El Paso, Texas, and of an effort to build a volunteer corps.

"Our work is just a drop in the bucket," she said, adding that "without skilled counsel, thousands of migrants will lose their cases, be deported and face grave danger, even death in their home countries."