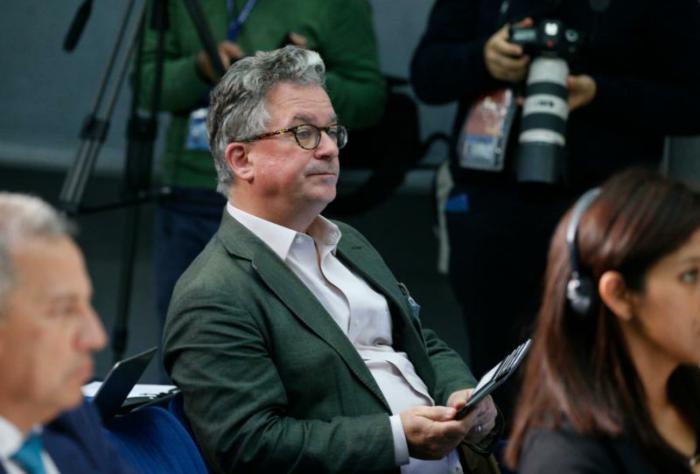 Austen Ivereigh, author of "Wounded Shepherd: Pope Francis and His Struggle to Convert the Catholic Church," attends a news conference after a session of the Synod of Bishops for the Amazon at the Vatican Oct. 22, 2019. James Rogers, chief communications officer for the U.S. Conference of Catholic Bishops, in a Nov. 7 statement criticized a chapter in Ivereigh's book for perpetuating "an unfortunate and inaccurate myth" that Pope Francis is facing resistance from the leadership and staff of the USCCB over reforms to address allegations of abuse and cover-up concerning U.S. bishops. (CNS photo/Paul Haring)

WASHINGTON (CNS) -- The chief communications officer for the U.S. Conference of Catholic Bishops criticized a new book on Pope Francis' papacy for perpetuating "an unfortunate and inaccurate myth" that Pope Francis is facing resistance from the leadership and staff of the bishops' conference.

The author of the book in turn has called the USCCB statement "carefully constructed if defensive" and said it doesn't dispute the facts of the account he has given.

What is being contested is a chapter in "Wounded Shepherd: Pope Francis and His Struggle to Convert the Catholic Church" by Austen Ivereigh. In "Wounded Shepherd," Ivereigh examines some of the major events of the Francis papacy and the controversies they often engendered.

In a chapter titled "A Church of Wounds," Ivereigh looks at the various sex abuse scandals that have confronted the church and the papacy during this pontificate. Near the end of that chapter, he recounts the efforts by the U.S. bishops in the wake of the revelations about former Cardinal Theodore E. McCarrick to devise procedures for addressing abuse and allegations of cover-up concerning U.S. bishops.

Ivereigh asserts that the draft of the U.S. reforms was to be voted on by the bishops at their November 2018 meeting "before Rome had a chance to see them first. The Vatican would be given the documents after the fact," Ivereigh wrote, citing an unnamed source who said, "Their strategy was to confront the pope with a 'fait accompli.'"

It "perpetuates an unfortunate and inaccurate myth that the Holy Father finds resistance among the leadership and staff of the U.S. bishops' conference," Rogers said.

"The author disparages the general secretary and a consultant on canonical affairs particularly by suggesting they drew up documents in October that were then deliberately excluded from Rome. This is false and misleading," Rogers concluded.

Rogers' statement details the wide input by various bishops' committees leading to draft legislation in September that was intended "to strengthen the already effective protection program enacted through the Dallas charter."

In the wake of the McCarrick scandal, it became widely understood that the "Charter for the Protection of Children and Young People," which the bishops approved in Dallas and implemented in 2002, addressed only the issue of abuse among clergy. Because in church canon law bishops are directly accountable to the Holy See, allegations of abuse or cover-ups by bishops were to be handled only by Rome.

Allegations against McCarrick were made public in June 2018 followed by the release of the Pennsylvania grand jury report alleging a widespread pattern of abuse and cover-up of abuse in six Pennsylvania dioceses over the past 70 years. In response, the U.S. bishops' conference set to work drafting proposals to hold bishops accountable and make it easier for allegations against a bishop to be received while at the same time intending that such proposals "stop short of where the authority of the Holy See began," Rogers said.

"Informal consultations with the Holy See took place in October" regarding these proposals, he said, but the intention of the drafters was "that the Holy See would have an opportunity to review and offer adjustments only on those drafts benefiting from the input of the full body of U.S. bishops, recognizing that substantial amendments could yet take place."

As announced by Cardinal Daniel N. DiNardo of Galveston-Houston, president of the bishops' conference, at the start of the November 2018 meeting, Cardinal Marc Ouellet, head of the Vatican's Congregation for Bishops, requested that the bishops not vote on the proposals, calling them premature and saying that any reform proposals should wait until after the heads of all the world's bishops' conferences met in February 2019.

"Cardinal DiNardo's decision to delay the vote" on the draft proposals "is a clear sign of his and his brother bishops' collaboration and obedience to the Holy Father," Rogers said. He noted that Cardinal DiNardo strongly supported Pope Francis' subsequent "motu proprio" "Vos Estis Lux Mundi" establishing a worldwide program of protection and moved revised U.S. proposals to a successful vote in the bishops' June 2019 meeting.

Ivereigh instead alleges that at the November meeting when he announced that there would be no vote on the proposals, Cardinal DiNardo attempted to blame the Vatican for the postponement. Ivereigh described it as an "attempt to deflect indignation onto Rome."

In an Nov. 8 interview with The Tablet, a British Catholic magazine that had previously published a report based on the allegations in "Wounded Shepherd," Ivereigh described the statement from the U.S. bishops' conference as "defensive" and said that it "doesn't in any way dispute the facts on which my account relies, while seeking to give an alternative interpretation of that account."