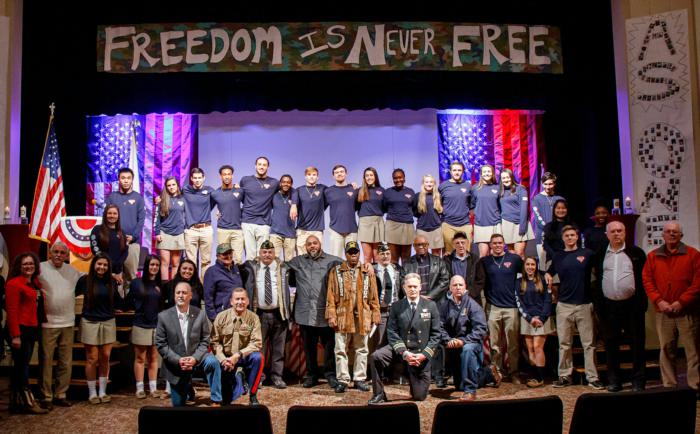 BROCKTON -- Firefighter Peter Reardon played bagpipes on the stage as students, teachers, and parents entered the Cardinal Spellman High School auditorium on Nov. 8. Greeters handed out programs, bracelets, and prayer cards with pictures of community members' relatives who are veterans. The stage was framed with banners, one on top saying "Freedom is never free," and two on the sides saying, "We stand as one."

Over the past few years, Holy Heroes, one of the school's senior ministries, has organized a Veterans Day prayer service in cooperation with the Brockton Veterans Affairs Office.

At the beginning of the Nov. 8 service, students lit a candle for each branch of the United States armed forces. Multiple videos were shown over the course of the program, expressing gratitude to veterans and commending them for their service.

Two veterans of the Vietnam War, Bob Gajoli and his brother Ray Gajoli, attended the prayer service and offered remarks. It was their third time coming to the school's Veterans Day event.

"The way you kids present yourself and thank us for our service, that was something we didn't get when we came home from Vietnam. So this has made a big difference in my brother's life and my life," Bob Gajoli said.

Ray Gajoli recalled how their father, who fought in World War II and the Korean War, always responded to people who thanked him for his service by saying, "You're worth it." He said coming to Cardinal Spellman High School for the Veterans Day prayer services has helped him to understand and connect with his father's feelings.

"I've come to feel that you are worth it, and that's made a difference," Ray Gajoli said.

The main speaker for the program was Gulf War veteran Anthony O'Brien, who graduated from Cardinal Spellman High School in 1977. A veteran Navy SEAL and decorated lieutenant, O'Brien currently works as a hospital service coordinator for Boston VA Healthcare System.

"Veterans cannot do it without the support of the American people, like you. We veterans thank you for that support," O'Brien told the Cardinal Spellman community.

O'Brien spoke with passionate energy about his faith as well as his military service.

"They say there are no atheists in foxholes," he said.

He acknowledged that many people experience "foxholes" at home. In keeping with the service's theme of teamwork, he encouraged the students to never give up and to reach out if they need help.

A slideshow was played showing pictures of community members' relatives who have served or are currently serving in the military. Students then offered prayers of the faithful, with the attendees responding, "We stand as one."

In his closing remarks, Cardinal Spellman High School President Daniel Hodes spoke about the other slogan framing the stage, "Freedom is never free."

"We often forget the currency used to pay for that freedom. Events like this remind us of that currency of sacrifice and suffering endured so all of us don't have to," Hodes said.

He thanked Board Chairman Kevin Kelley and his wife Mary Ellen Kelley, who last year established the Rose Fund, a Cardinal Spellman High School scholarship for children of veterans and active military duty personnel. The Kelleys have pledged to match up to $250,000 in contributions to the scholarship fund.

"Today is a day we are reminded, more than most days, that when we are united, great things are possible. And so let us remember the lessons of our veterans. And let us truly stand as one," Hodes said.