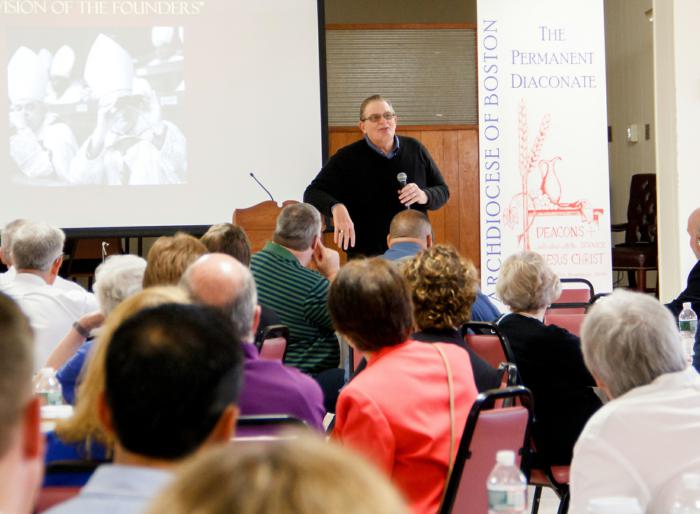 MILTON -- Permanent deacons from throughout the archdiocese attended the annual convocation of the Boston Diaconate Community on Sept. 28, which included announcements from their leaders, presentations from a keynote speaker, and a Mass with Cardinal Seán O'Malley.

Sitting at dozens of round tables in the basement of St. Elizabeth Church, the deacons, many accompanied by their wives, heard two presentations over the course of the day. In between, Cardinal O'Malley celebrated Mass for the convocation attendees in the main church. During the Mass, 13 men were admitted to candidacy for the diaconate: Pacceli Braga, Paul Bukow, David Cosgrove, Armand Dilando, Thomas Hines, Luc Lambert, Francisco Mesa, Frederick O'Brien, Hugo Ochoa, Thong Phamduy, Gilbert Sullivan, Carlos Turcios, and Richard Vatcher.

The keynote speaker for the convocation was Deacon William Ditewig, Ph.D., a professor, linguist, and retired Navy commander. Deacon Ditewig was a seminarian in high school and college and worked on the senior staff of the U.S. Conference of Catholic Bishops for five years.

Deacon Ditewig's presentations focused on the origin and purpose of the permanent diaconate, tracing its roots to the ideas of Vatican II and emphasizing the virtues of humility and servanthood.

Deacon Ditewig spoke about how the bishops of the Second Vatican Council developed their vision of the permanent diaconate in the years leading up to the council. Most of the bishops had lived through the two world wars, the Holocaust, the emergence of atomic weapons, and the rise of Communism and fascism. Deacon Ditewig said he believes that Vatican II was the Church's response to World War II and its causes and effects.

"The bishops at the council were not theological and canonical encyclopedias. They were practical men trying to meet the needs of their people in the modern world. They were there to work out possible solutions," Deacon Ditewig said.

None of the bishops at Vatican II had ever known a permanent deacon, but the idea of reviving the permanent diaconate had spread enough that many wanted to discuss it. Lutherans in Germany had revived this biblical position in the 1800s. Priests imprisoned in Dachau, where there was a cell block designated for clergy, discussed how the Church could be more active in preventing such atrocities from happening in the future. Those who survived the war later wrote about the diaconate as one aspect of possible reform. The deacon would be a sign of Christ's servanthood.

The theme of humility ran throughout Deacon Ditewig's presentations. He recommended reading the chapter of the Rule of St. Benedict dedicated to humility.

He talked about Pope John XXIII's call for the Church to be "the Church of the poor." This idea was echoed in the Pact of the Catacombs, a little-known document that was signed by over 500 bishops at the end of Vatican II, which had a great impact on the bishops of Central and South America. It specified practical commitments in the bishops' lifestyles, such as housing, food, transportation, and appearance.

"Notice the underlying theme of humility, of service. We exist for the good of others," Deacon Ditewig said.

Echoing Paul VI's words in "Gaudium et Spes" about "scrutinizing the signs of the times," Deacon Ditewig encouraged the deacons to engage with culture rather than shun it. While not buying into it, he said, they must try to understand it.

"We don't run away from aspects of modern culture, we dive into it to change it," he said.

Popes John XXIII, Paul VI, and John Paul II each expressed the need for "novus habitus mentis," a "new way of thinking," to look at and respond to the modern world.

Deacon Ditewig quoted Pope John XXIII's words in the opening address of the Second Vatican Council, "The substance of the ancient doctrine of the Deposit of Faith is one thing, but the way it is presented is another."

Deacon Ditewig encouraged the deacons to serve not only within the boundaries of their parish but also in their wider communities. He described the formation program for German deacons, who are sent to their hometowns to find and fulfill a need not currently being met, without engaging the diocese.

"There's life beyond the parish, and we deacons are supposed to be the eyes and the ears and the heart and the hands of our bishop. What are the needs that aren't being met? We need to constantly look for them," Deacon Ditewig said.

He also urged the deacons to be considerate of the needs of the whole Church.

"We aren't ordained to serve so that others don't have to," he said. Rather, deacons must animate others to service.