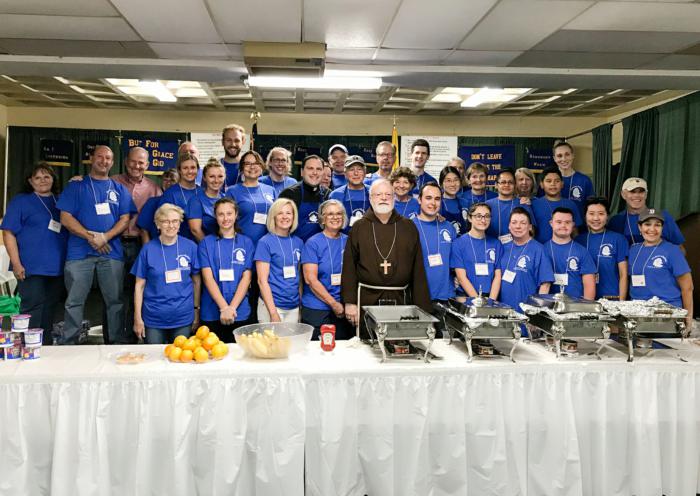 Cardinal O'Malley poses for a photo with volunteers during a Peace Breakfast at St. Monica-St. Augustine Parish in South Boston. Pilot photo/CardinalSeansBlog.org

This past Friday was the feast of St. Mary of the Angels of the Portiuncula, which was also the 35th anniversary of my episcopal ordination.

I look back at that moment with great gratitude for having given me the opportunity to serve the wonderful Catholics of four extraordinary dioceses, and it all began in the Cathedral of Sts. Peter and Paul in the Virgin Islands -- 35 years ago.

I have very fond memories of the occasion, being surrounded by family and friends and feeling the support of the priests and people of the Virgin Islands.

The founding bishop of the diocese, Bishop Edward Harper, who had been the provincial of the Redemptorist Fathers in Puerto Rico, was a wonderful mentor and an example for me.

It was a missionary diocese, and there were many challenges and opportunities. One of the things that we did very early on (though, when I arrived, our archdiocesan budget was a grand total of $30,000) was to waste no time in establishing a television station and a diocesan newspaper. We established them in an effort to unify the diocese across the different islands, so the people could become more aware of what was happening in the other parishes and grow in their sense of unity and communion.

One of my great helpers in this endeavor was Mary Conway, who came to us with a vast experience in Catholic journalism from the Catholic Standard in Washington. She very ably established our diocesan newspaper, the Catholic Islander.

I am very pleased to say that both the television station and the newspaper continue to this day.

The feast of the Portiuncula is a very important day for all the branches of the Franciscan family, which is why I chose it for my episcopal ordination.

St. Mary of the Angels in Assisi was the third of three churches that St. Francis restored, and it was so dear to him that he gave the nickname of the Portiuncula, which means "The Little Portion," and it became a sort of the motherhouse of the Franciscans. It is the place where the Franciscans held their first Chapters, where St. Clare made her vows, and where St. Francis died in 1226.

On the feast, one can receive the Portiuncula Indulgence. St. Francis had a great devotion to the Holy Land and went there on pilgrimage himself. However, he realized that the vast majority of people would never be able to make the long and dangerous journey to the Holy Land. So, he asked the pope to grant a plenary indulgence to those who made a pilgrimage to the Portiuncula. The request was granted by Honorius III and later was extended to those who visited any Franciscan church or chapel on the feast day (in addition, of course, to fulfilling the usual conditions for an indulgence).

The Portiuncula is housed inside the much larger Basilica of St. Mary of the Angels in Assisi, and you can still visit it today.

I also always like to remind people that we have an exact replica of the Portiuncula much closer to home. Cardinal Cushing had it constructed in Hanover to be his final resting place.

On Saturday morning, I went to a Peace Breakfast at St. Monica-St. Augustine Parish in South Boston, which is part of their Good Samaritan Ministry.

The Good Samaritan Ministry does a great deal of outreach to people who live in the nearby Mary Ellen McCormack Public Housing Community and surrounding neighborhoods, as well as to homeless people who are facing the challenge of addiction or mental health problems. Deacon Paul Klein, Father Peter DeFazio, and Father Joe White are very much involved in this ministry.

The program has just an army of volunteers, and they get a great deal of support from the Boston Police Department, as well.

This particular breakfast was an occasion to honor Bill McGonagle who recently retired after many years of service leading the Boston Housing Authority and who has been a great supporter of that ministry. He was instrumental in getting it off the ground and has been a steadfast supporter ever since.

It was a pleasure to be able to honor Bill and to recognize him for all that he has done.