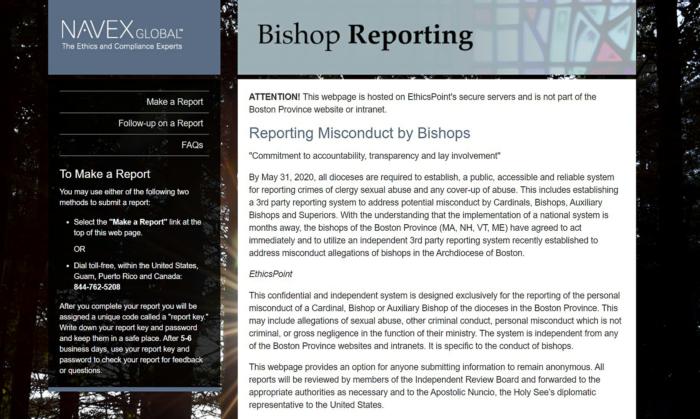 A screen capture of the EthicsPoint website for reporting misconduct by bishops of the Boston Province, which includes dioceses in the states of Massachusetts, Vermont, New Hampshire and Maine. Pilot photo from EthicsPoint.com

BRAINTREE -- The bishops of the seven dioceses that make up the Boston Province have implemented an independent third-party system for reporting misconduct committed by bishops.

The Province of Boston, of which Cardinal Seán P. O'Malley is the metropolitan archbishop, is composed of the Archdiocese of Boston and the Dioceses of Fall River, Worcester and Springfield in Massachusetts; the Diocese of Burlington in Vermont; Diocese of Manchester in New Hampshire; and Diocese of Portland in Maine.

In May, Pope Francis issued a motu proprio, "Vos estis lux mundi" ("You are the light of the world"), which identified ways to respond to the clergy sexual abuse crisis. Included was a requirement for "all dioceses in every country to establish a public, accessible and reliable system for reporting crimes of clergy sexual abuse and any cover-up of abuse by May 31, 2020," the bishops of the province said in their statement announcing the new reporting system.

In June, the U.S. Conference of Catholic Bishops met and, following guidance from "Vos estis lux mundi," approved the establishment of a national third-party reporting system to handle allegations or complaints against bishops.

"With the understanding that the implementation of the national system is months away, the bishops of the Boston Province agreed to join a program already established by the Archdiocese of Boston through an independent EthicsPoint website," the bishops said.

EthicsPoint is an anonymous, confidential web based system for reporting concerns about ethics violations or finance improprieties. Reports can also be made through a toll-free hotline.

In March, Cardinal O'Malley had announced that the Archdiocese of Boston would use EthicsPoint for reporting misconduct by cardinals, bishops, or auxiliary bishops.

"Much has been accomplished over nearly two decades to address the clergy sexual abuse crisis in the Catholic Church, including instituting mandatory reporting to civil authorities, protection and prevention training, and pastoral support and outreach for survivors, among other steps. However, more is required to ensure that there is an effective and independent system in place to report misconduct by bishops," the Boston Province bishops said.

"Those who were sexually abused by clergy, along with their families and loved ones, must always be the central focus of our ongoing response to the sexual abuse of minors. There is no doubt that they have suffered greatly. In order for the Catholic Church to continue to restore trust and credibility, leadership must be committed to transparency and accountability. We hope and pray that this effort will further strengthen the work begun nearly two decades ago to offer healing," the bishops added.