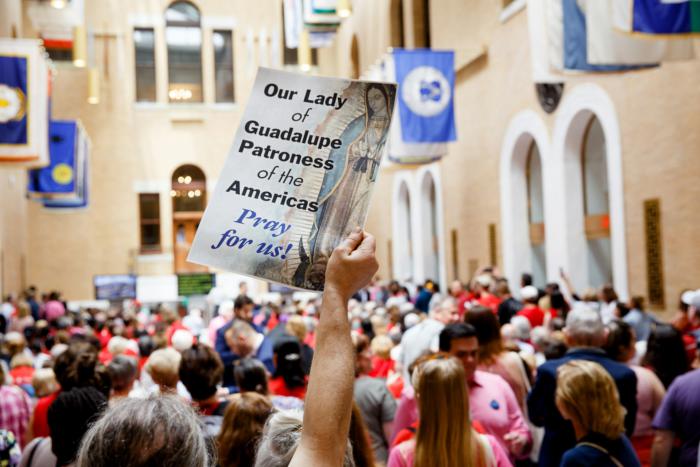 A man holds up a sign in the Hall of Flags, one of the overflow areas in the State House where members of the public could listen to testimony on the ROE Act, June 17. Pilot photo/Gregory L. Tracy

Following are the prepared texts of oral testimony on House Bill 3320 and Senate Bill 1209, known collectively as the ROE Act, presented by representatives of the Massachusetts Catholic Conference to the Massachusetts Legislature's Joint Committee on the Judiciary, June 17.

Good Afternoon Chairman Eldridge, Chairwoman Cronin and members of the committee. My name is James Driscoll, Executive Director of the Massachusetts Catholic Conference. The Conference represents the Archdiocese of Boston along with the Dioceses of Fall River, Worcester, and Springfield. Thank you for the opportunity to testify. I am appearing in opposition to House Bill 3320 and Senate Bill 1209.

As I am sure the committee is aware, the Catholic Church has always upheld the dignity of human life and spoken out against abortion at all stages of pregnancy. For the record, that position has not and will not change. However, the Church is cognizant of the fact that Massachusetts General Laws currently provide for abortions within several sections of Chapter 112. Those laws also have several important limitations in place for abortions that take place after 24 weeks of pregnancy. The proposed bills before you drastically gut those limitations and safeguards. For example, in just one sentence included in both bills 10 crucial provisions of current law for abortions that occur after 24 weeks are completely deleted. Those deletions along with new language inserted would:

1. Expand abortion access, including late-term abortions, during the nine months of pregnancy for virtually any reason.

2. Eliminate any requirements that late-term abortions be performed in a hospital;

3. Eliminate the requirement that provides medical care to a child who survives an abortion attempt;

4. Eliminate the requirement that a minor under the age of 18 have the consent of a parent, guardian, or the courts; and

I have heard that the proponents say that these bills are about amending current law by simply adding lethal fetal anomalies, or where the fetus is incompatible with sustained life outside the uterus. These bills do add that language, but they go much further. They drastically change the landscape of current Massachusetts law as I detailed in the five points I highlighted.

Finally, as you know, I appear before you representing the Roman Catholic Bishops of Massachusetts. Some may therefore ignore our arguments and brush them aside by thinking the Church is trying to overturn Roe v. Wade by opposing these bills. That is not what the Church is doing today and that is not why I am here today. I am here in opposition to these two specific bills that are before this Committee asking you not to act favorably on them.

Thank you, and I would like to introduce Dr. Lucy Bayer-Zwirello.

My name is Dr. Lucy Bayer-Zwirello, I am a practicing obstetrician and maternal fetal medicine physician for over 30 years, most of them in the State of Massachusetts. I am here to testify in opposition to H.3320 and S.1209.

As a physician, an obstetrician and a maternal fetal medicine provider, I am here to propose that an expansion of the Supreme Court Roe v. Wade decision is unnecessary.

I wish to make three points to support this position:

When the original ROE Act was established in the 70s, few premature newborns less than 28 week gestational age (7 months) survived, which is why the original act allowed abortion until 24 weeks. In essence, to prevent a live birth. However, today it is commonplace for a newborn of 24 weeks to survive. To allow abortion beyond 24 weeks will ultimately lead to live births, which technically we are mandated to help survive. A newborn at this gestational age may take anywhere from a few minutes to many hours to die. Expanding the gestational age of abortion is not a simple procedure. It will entail a combination of feticide, labor and delivery of a dead baby.

My second point I wish to make, is that preterm delivery even prior to viability is sometimes needed indeed to save a mother's life. There are several very dangerous medical and obstetrical conditions, which mandate early delivery. The priority is obviously always the mother's life. Severe pre-eclampsia remote from viability is not a situation that can be put on hold. At any given moment, mothers have to be delivered prior to viability because of this condition. Infection in the womb, such as chorioamnionitis, is another emergency frequently seen after rupture of the membranes, also necessitating delivery. A medical or obstetrical complication that requires delivery should and will be taken care of at any gestational age, mitigating the need for "abortion" after 24 weeks.

As for the third point of lethal abnormalities, the vast majority is discovered early in the pregnancy, and if not, one could argue that induction of labor could be expedited to prevent maternal complication. In some late-term abortions, surgical removal of the fetus is done through the vagina and requires labor to dilate the cervix followed then by delivery. Even if the patient is asleep for the actual extraction of the fetus, this may be a long and arduous process. Delivery or abortion after 24 weeks is not a simple procedure that can be done simply by taking the women to the operating room to extract the fetus piecemeal via the vagina. After feticide (by lethal injection of potassium chloride or digitalis) the patient will have to labor and deliver vaginally. Maternal complications of such a delivery include hemorrhage, infection, and all the risk of any delivery, including maternal death.

In conclusion: statistically the majority of abortions are performed in the first or early second trimester, only 3 to 4 percent of all abortions are after 19 weeks to 24 weeks. Expanding abortion on demand past 24 weeks is unnecessary and will lead to more maternal complications. The solution to unwanted pregnancy is not an expansion of the ROE Act; rather it is an improvement of the social, educational, medical and moral support as well as access and prevention for young women and women of all reproductive age.

Madam Chairwoman and Mr. Chairman and members of the Committee. Thank you for giving me the opportunity to give my testimony in objection to H.3320 and S.1209.

My name is Lauren Belschner, I am a neonatal ICU nurse at a prominent Boston hospital. My job is to provide lifesaving care to babies ranging from 23 to 40-plus weeks.

Today, I hope to make an introduction. I want to introduce you to a person that many do not get the chance to meet. This person is often hidden behind terms such as "fetal anomaly" and "incompatible with life."

My belief is that once you have the opportunity to meet these babies with fetal anomalies you will have a hard time telling them their imperfections are not worthy of life.

But for me, the first time I held one of these babies, everything changed and that firmness disappeared.

In my five years as a NICU nurse, I have changed the diapers, filed the fingernails and looked into the eyes of countless babies with fetal anomalies.

One story I want to share with you happened one month ago. But let me emphasize, this happens every day, just in our city.

On this specific day, there were three scheduled deliveries that our NICU team was slotted to attend due to prenatally diagnosed fetal cardiac anomalies. It was anticipated that these three babies with fetal anomalies were going to require extensive respiratory and cardiac support. To be honest, it was unclear if they would make it out alive.

Not only did they make it out alive, as each one of those three babies emerged from their mother's wombs something unexpected happened. Their voices filled the room with crying and screaming, which in the world of delivering babies is the sweetest sound to hear -- this meant that their anomalies were not as bad as predicted. They were breathing and alive. Every practitioner's eyes widened with amazement -- not exactly what we anticipated, was it? I have experienced this scenario time and time again.

My belief is that once you meet these babies with fetal anomalies, you'll realize that they are not objects to be tossed -- they are babies to be held.

Ultimately, I hope you get the opportunity to introduce yourself to these babies with fetal anomalies, these Massachusetts citizens, these people.

Good afternoon. My name is Dr. Ellen Johnson. I'm here today to testify in opposition to the ROE Act.

I am a practicing radiologist with 23 years experience and Director of Women's Imaging and Intervention at my institution. My work includes maternal and fetal imaging, including evaluation of fetal anomalies and post abortion complications. I also counsel women on their diagnoses, which range from joyous to tragic.

As a woman physician, my main concern regarding the ROE bills is that they lower the current medical standard of reproductive healthcare and, through the deletion of 10 sections of the current law, and the introduction of new broad, sweeping, vague, ambiguous language, they effectively legalize abortion in the third trimester of pregnancy for virtually any reason. There is no argument which could justify introducing those loopholes into our laws.

Expanding abortion access after 24 weeks to include fatal fetal anomalies is medically unnecessary and unsafe. After 20 weeks gestation, with every week of gestational age, there is an increase in abortion related complications, including maternal death, by 38 percent. For that reason, the standard of care for fatal fetal anomalies discovered later in pregnancy is labor induction and delivery, wait for natural labor and delivery, or, in emergent cases, perform cesarean section.

The diagnosis of fatal fetal anomalies is painful for both patients and providers. I was closely involved in the care of a scared single teenage mother who learned later in her pregnancy that her unborn daughter had fatal kidney disease and would not survive past birth. She underwent a planned induced delivery allowing her to cradle and comfort her daughter for the 53 minutes she was alive. She kept in touch with me for years and emphasized many times how important the birth process was in managing her grief which helped her healing and ability to move forward in her life.

Terminating her pregnancy before birth would have offered no health or timeline advantage, and, would have deprived her of the chance to feel some measure of control, provide death with dignity for her daughter and closure for herself.

There are also cases where the prenatal diagnosis of a fatal fetal anomaly was wrong and an abortion would have been tragic.

According to the Center for Disease Control, abortions performed at 21 weeks or later represent about 1.3 percent of all abortions. Research data from the Guttmacher Institute, a leading pro-choice research and policy group, reveals that the reasons for those late abortions were overwhelmingly socioeconomic and not related to maternal health risk or fatal fetal anomalies. As painful and compelling as those socioeconomic reasons are, they do not justify legalizing elective termination of a heathy viable fetus late in pregnancy. There are other options, including referral to counseling, and education about other options, such as adoption.

Guttmacher recently categorized Massachusetts as one of 12 states that were "supportive" to abortion rights as opposed to "middle ground," "hostile or extremely hostile" refuting ROE Act claims of burdensome obstacles and restrictions in our state.

The committee should report the bill unfavorably.