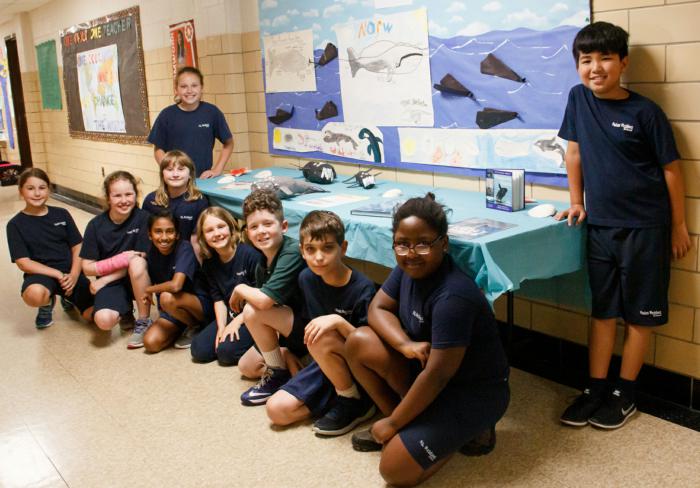 Students in grades four and five at St. Bridget School in Framingham investigated the question, "What can we do to help save the North Atlantic right whale from extinction?" as part of the school's problem-based learning initiative. Pilot photo/Jacqueline Tetrault

FRAMINGHAM -- "How do we get students more authentically involved in their education?" That was the question Principal Cathleen Chaves posed to the teachers at St. Bridget School.

In the last trimester of the academic year, Chaves "challenged the teachers to develop a problem-based learning unit appropriate for their grade level," according to materials from the school. The projects would have to "integrate multiple curricular areas" and require students to "make a meaningful contribution to the world."

"The idea was that they were going to use the knowledge and skills that they had acquired and developed over the course of the year, and take that and apply it to a brand-new situation," Chaves told the Pilot.

The teachers chose their students' topics, but the students formulated the questions their respective classes had to answer.

For example, every year the kindergarten students hatch and release butterflies, but this year they investigated whether the school had an environment that butterflies could thrive in. After researching the topic, they concluded that they did not have a suitable habitat, and then endeavored to create one.

The students raised funds by making pencils with butterfly accessories and selling them during recess and dismissal. They wrote letters to local nurseries, asking them to donate plants that butterflies would like. The school custodian helped them plant the butterfly garden outside the school.

The preschool, pre-kindergarten, and fourth-grade students addressed problems of hunger and food security in the community. To promote reading in the community, first-grade students collected book donations and designed a "take-and-read" library, a bookshelf that will be kept in the hallway, where all students can access it. Second-grade students designed improvements for the school's grotto, which were completed in time for First Communion. Third-grade students investigated whether students would perform better if they had a longer recess.

Grades four and five visited the Woods Hole Oceanographic Institution and asked, "What can we do to help save the North Atlantic right whale from extinction?" They designed and made models of lobster traps that would be harmless to the endangered whales.

The topic and scope of the project for grades six, seven, and eight came through personal connections between the school and the nearby community of Ashland. The students studied the Nyanza Chemical Waste Dump, the site of a textile and dye company from 1965 to 1978. Chemicals from the color plant entered the groundwater in Ashland and caused cancer for several people, including Kevin Kane, the son of St. Bridget School's former nurse, Marie Kane. Kevin Kane spent the last months of his life advocating for officials to study the site, until his death in 1998, at age 26. It is now an EPA Superfund Site.

Because Kevin Kane died a generation ago, the middle school students asked the question, "How do we keep the next generation informed (about Nyanza)?" They learned about the concept of restorative justice and grappled with how to "forgive but not forget." The students heard presentations and participated in a question-and-answer session with the Ashland Citizens Action Committee and the state representative responsible for the legislation and funding that created the Ashland Health Study.

"They really took it seriously," Elizabeth Barrett, who teaches Spanish and religion, told the Pilot.

In their projects, the middle school students incorporated science, math, language arts, and religion, with a few also adding art and foreign language components. They conducted experiments simulating water filtration and runoff, wrote essays about their findings, and made public service announcements using slideshows or videos. The students displayed their projects in the cafeteria on May 31.

One of the people who came to see the Nyanza projects was Marie Kane. At the end of the day, Barrett and several students presented her with a $50 check for the Ashland Memorial Healing Garden and a $200 check for the Kevin Kane Memorial Scholarship Fund.

"I did not expect all that I saw, and I am so, so impressed with all of you," Marie Kane told the students.