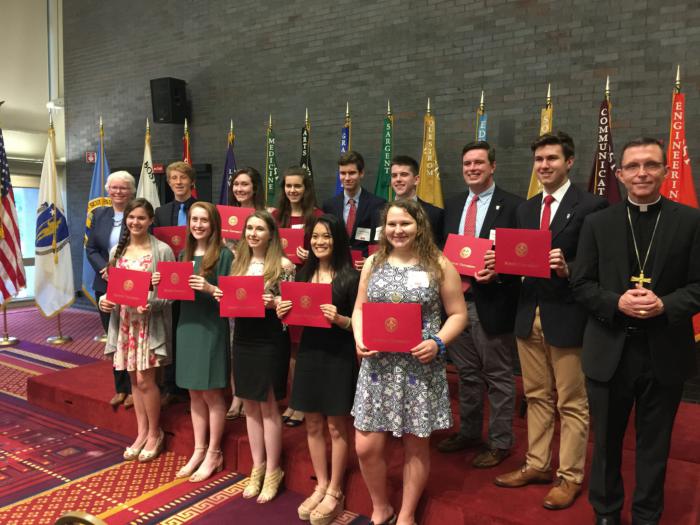 This past Saturday we celebrated our presbyteral ordinations in Boston. On the eve of the ordination, I have the custom of gathering for vespers and dinner with the deacons to be ordained priests the next day. That's an opportunity for me to meet with them individually and give them their first assignments. That way when they go to the ordination, they're not worried about what their assignments are going to be, that's all been established for them.

Being able to do it in the renovated Cathedral of the Holy Cross was a great joy. It was the second time in a month that we had standing room only in the cathedral, which means there were well over 2,000 people. It is a great source of hope for our Catholic community in Boston.

That afternoon we went to St. Anthony's in Cambridge where the Portuguese and Brazilian communities were having a celebration to mark the graduation of Father Cristiano Barbosa, a priest who's been working in the archdiocese for almost 10 years and who has made a huge contribution, particularly in the Brazilian community. So, I was happy to go and join the people for the celebration.

Father Cristiano received a doctorate degree in theology. It took him 10 years, but I was hoping he would never finish so he could continue with us! The good news is that I spoke with his bishop, and his bishop is going to allow him to continue to work here with the Brazilians so we're very grateful for that.

Father Walter Carreiro, who is always so gracious, had his parishioners serve "bacalhau com natas" (cod fish with cream) because they know it's my favorite Portuguese dish. It was good to see so many of the parishioners from St. Anthony's and the Shalom Catholic Community all gathered there for the occasion.

Sunday, I went to Charlestown to mark the 160th anniversary of St. Francis de Sales Parish. On the way there I stopped by St. Mary Parish, also in Charlestown, to greet the First Communion children.

Father Ronan, the pastor at St. Mary's, told me this was the largest First Communion class they've had in many years. I think there were almost 40 children. Also, the Good Shepherd School there that they started a few years back has a waiting list. Father Ronan has done an extraordinary job in that community.

From there I went to the 160th anniversary of St. Francis de Sales. Father Daniel Mahoney has been there for a long time. He is also the chaplain for the Boston Fire Department and has done such good work, particularly with the firefighters and their families.

It was a very moving celebration for the people, as we reflected on the 160 years of that community.

I had to travel that evening to be in Washington the next day for the installation of the new Archbishop there, so, we're very happy that Bishop Reed was able to represent me at the scholarship ceremony.