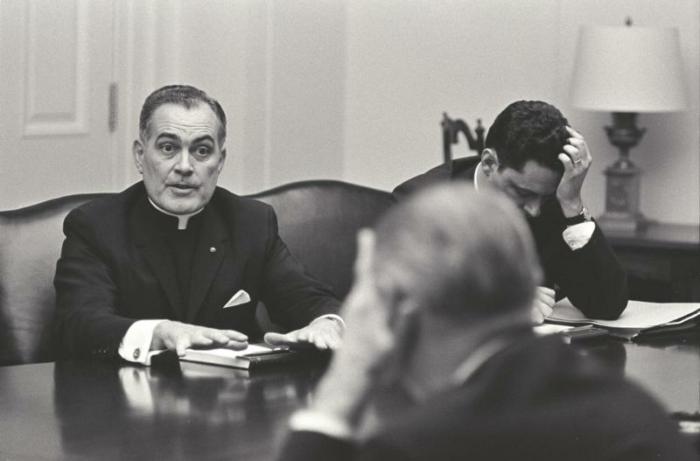 This image is part of the new documentary "Hesburgh," about Holy Cross Father Theodore Hesburgh, the priest who led the University of Notre Dame for 35 years. Director Patrick Creadon and his crew spent two and a half years making "Hesburgh," which opens May 3 in 35 U.S. cities. (CNS photo/courtesy OCP Media)

NEW YORK (CNS) -- There was a time in the 1970s when Holy Cross Father Theodore Hesburgh (1917-2015) seemed to be ubiquitous. Well into his long tenure as president of the University of Notre Dame, Father Hesburgh had by then also been involved in Cold War diplomacy, the civil rights movement and shaping the changing character of Catholic higher education.

He had, moreover, taken high-profile positions on the Vietnam War and the student protests it provoked. As early as February 1962, in fact, Father Hesburgh had been featured on the cover of Time magazine, a distinction then considered a true measure of fame.

In the documentary "Hesburgh" (O'Malley Creadon), filmmaker Patrick Creadon provides an informative, though wholly uncritical, biography chronicling many of his globetrotting subject's varied endeavors and accomplishments. It's an educational look back at tumultuous times and one ever-active participant in them that's suitable for teens and their elders.

Along with archival photos and footage, "Hesburgh" includes interviews with a diverse range of figures, from journalists Ted Koppel and Ken Woodward to political figures like former Wyoming Sen. Alan Simpson, a Republican, and former cabinet member Leon Panetta, a Democrat.

Perhaps more surprisingly, Margo Howard, daughter of advice columnist Ann Landers (real name Esther "Eppie" Lederer), appears to discuss her mother's close and long-lasting friendship with Father Hesburgh. They kept up a voluminous correspondence, some of which involved Landers seeking the priest's counsel on various topics raised by her readers.

Creadon touches on a number of controversial incidents in Father Hesburgh's career. Early on, he got into a tangle with Cardinal Alfredo Ottaviani, the powerful head of what was then called the Holy Office (now the Congregation for the Doctrine of the Faith), over Notre Dame's publication of a book that included work by American Jesuit theologian Father John Courtney Murray.

At the time, Father Murray was regarded with suspicion in official circles for his cutting-edge views on church-state relations. He would go on to exercise an influence on the Second Vatican Council's 1965 declaration on religious freedom, "Dignitatis Humanae." Predictably, Father Hesburgh is portrayed as a champion of academic freedom, courageously defying the stultifying strictures of the authorities in Rome.

Similarly, the narrative depicts Father Hesburgh's participation in the drafting of the 1967 Land O'Lakes Statement on Catholic universities in an exclusively positive light. While Father Hesburgh saw that document as a successful attempt to balance faith and academics, others have seen it as taking a very different approach from, for instance, St. John Paul II's 1990 apostolic constitution "Ex Corde Ecclesiae."

Father Hesburgh also supported his successor's contentious 2009 choice of President Barack Obama as both a commencement speaker and the recipient of an honorary degree from Notre Dame, despite the chief executive's strong pro-choice stance.

Viewers will be unanimous in their appreciation of Father Hesburgh's work first as a member and afterward as chairman of the U.S. Civil Rights Commission. They'll also be intrigued by his behind-the-scenes mediation between American and Soviet representatives to the International Atomic Energy Agency during his service as a delegate of the Holy See to that body.

Most significantly, Creadon and screenwriters William Neal, Nick Andert and Jerry Barca emphasize Father Hesburgh's enduring love of the priesthood. Whatever other roles he might take on, Father Hesburgh's own writings, read here by Maurice LaMarche, make it clear that he was always, first and foremost, a Catholic priest.

The film contains mature themes, potentially disturbing sights and a single mild oath. The Catholic News Service classification is A-II -- adults and adolescents. Not rated by the Motion Picture Association of America.

Informative, though wholly uncritical, biographical documentary about Holy Cross Father Theodore Hesburgh (1917-2015) chronicles not only his long tenure as president of the University of Notre Dame but his involvement in cold-war diplomacy, the civil rights movement and shaping the changing character of Catholic higher education. Filmmaker Patrick Creadon's profile touches on a number of controversial incidents in the once seemingly ubiquitous cleric's career and deals with issues that may still divide Catholic viewers. But he also emphasizes his subject's enduring love of the priesthood. Mature themes, potentially disturbing sights, a single mild oath. The Catholic News Service classification is A-II -- adults and adolescents. Not rated by the Motion Picture Association of America.