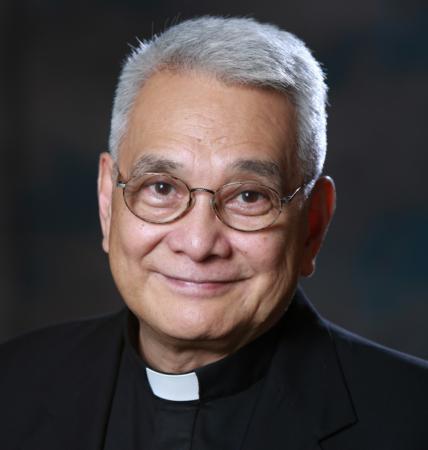 [This is the eleventh in a series of articles profiling each of the 13 men who will be ordained to the priesthood on May 18.]

CHESTNUT HILL -- When Deacon Victor Vitug was growing up in the Philippines, his mother took him to a church named for Our Lady of Lourdes every Saturday. Eventually, she told him the reason for her devotion. When she was pregnant with him, she had cancer of the uterus. No one thought that she or her child would live.

"When she thought she was going to die, she saw the Virgin smiling at her," Deacon Vitug told the Pilot in March. He said his mother attributed their survival to the Virgin Mary's intercession.

Deacon Vitug said that he did not have a devotion to Mary growing up, but "looking back now, I see how Our Lady has been at the background of my vocation, guarding me, leading me to her son."

He said that his family had always told him if he received a good education and was successful in his work, he would be happy. But, while he enjoyed a prosperous career, he did not feel fulfilled.

"I was, I would say, happy and yet empty at the same time. I think that was God's way of leading me into the Church," Deacon Vitug said.

When he was 39 years old and almost at the peak of his career, he felt the call -- not to the priesthood, but to join the community of the Neocatechumenal Way. Before that, he said, he had "thought the Church was just a structure where you go to Mass."

When he joined the community, he said, "I saw this is one way of God telling me that this is the living Church."

About 13 years after Deacon Vitug joined the Neocatechumenal Way, he heard about an opportunity to go on mission -- something he had wanted to do for a long time. He was held back by the need to support his family and care for his sick mother, brother, and nephew. However, within a short span of time, all three of his ill relatives passed away and the company he worked for went into bankruptcy. In this way, Deacon Vitug said, God took away every excuse.

After four years of mission work, he went on an end-of-year retreat, which ended with inviting people who were interested in becoming missionaries or priests. Deacon Vitug said the call was "very strong" at that moment.

"I stood up, and immediately I went into crisis," he said, noting that he was 57 when this happened.

Deacon Vitug believes he is "dealing with a God who is full of surprises." He said he feels as though God called him "at the 11th hour," like the hired workers in the parable of the vineyard.

"Looking back now, I see how God had his way, because he slowly led me into (a) community where I stayed for several years, called me to mission and then in the mission led me into this," he said.

He added that if God had immediately led him to the priesthood, he would have said ''no.''

Deacon Vitug was initially sent to Guam, where he studied philosophy and theology. After seven years there, he came to Boston.

He spent his 67th birthday in Mexico on a pilgrimage with other seminarians. He said the experience helped to confirm his vocation.

"I was so struck and so amazed, because Our Lady of Guadalupe was there to tell me not to be afraid, just like what she said to Juan Diego," Deacon Vitug said.