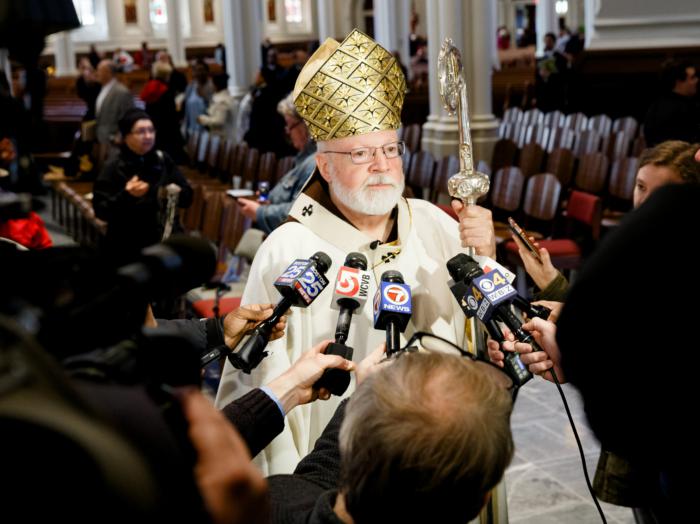 BOSTON -- Speaking to the media following the annual Chrism Mass the Cathedral of the Holy Cross April 16, Cardinal Seán P. O'Malley expressed his sadness at the damage sustained by Paris' Cathedral of Notre Dame in an April 15 fire.

The Cathedral of Notre Dame "has been such an iconic place and we grieve at the loss of this and pray that they'll be able to restore it, so the people will be able to be inspired and to go there and visit and pray and feel the history that has taken place there during so many centuries," Cardinal O'Malley said.

Cardinal O'Malley called Notre Dame "one of the most important shrines in Christendom." He said he was at Notre Dame in 1997 when Pope John Paul II beatified Blessed Frédéric Ozanam, the founder of the St. Vincent de Paul Society.

"I'm hoping it can be restored but I can only imagine the distress of the French people, particularly people in Paris," Cardinal O'Malley said.

He said he would be in contact with the Archbishop of Paris "to express our solidarity and our support."

"I'm glad that they were able to save as much as they were, because I thought they would lose the entire structure. But thank God those towers that are almost a thousand years old were able to be rescued," he said.

He noted that the current Cathedral of Notre Dame was not the first one on that spot. He said there have been churches there since 400 A.D., and that new ones were built as the community outgrew the old ones, similar to how the current Cathedral of the Holy Cross was built when the Boston Catholic community outgrew the original cathedral on Franklin Street.

He also spoke of the recently completed renovations Cathedral of the Holy Cross and the archdiocese's efforts to keep its churches safe.

"These old churches, if you don't restore them and keep them up, eventually you'll lose them. So we were very, very grateful that we were able to do this restoration at this point after 150 years," he said.

"We're always urging our pastors to be attentive to the needs (of our churches). We have a real estate department in the archdiocese that goes out and visits the different sites to make sure we're up to code and attending to these things," he said.