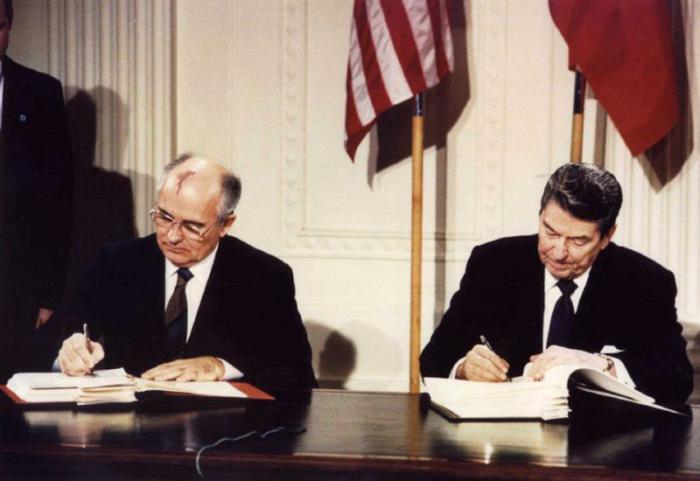 Soviet President Mikhail Gorbachev and U.S. President Ronald Reagan sign the Intermediate-Range Nuclear Forces treaty at the White House in Washington Dec. 8 1987. On Feb. 2, 2019, the U.S. announced its withdrawal from the INF treaty, followed by Russia a day later. The move has prompted concerns among disarmament advocates there could be a new arms race. (CNS photo/Reuters)

WASHINGTON (CNS) -- The Trump administration's decision to withdraw from one of the last major nuclear arms control treaties between the United States and Russia is leading to renewed fears among disarmament advocates of a resurgence in costly spending on the most dangerous weapons ever produced.

The decision to leave the 1987 Intermediate-Range Nuclear Forces treaty comes as the U.S. has started building its first long-range nuclear weapons in nearly three decades under a massive program to update and modernize its nuclear arsenal.

Other nations have cited the move as justification to carry out their own weapons upgrades.

"My concern is that we are in fact galloping in the wrong direction," Marie Dennis, co-president of Pax Christi International, the Catholic peace organization, told Catholic News Service.

"It's unbelievable that we have witnessed the collapse of a process of negotiating treaty regimes and serious efforts to protect the world from nuclear catastrophe. It is frightening that our political leaders don't absorb what would be the consequences if we use nuclear weapons," Dennis said.

Archbishop Timothy P. Broglio of the U.S. Archdiocese for the Military Services, chairman of the U.S. bishops' Committee on International Justice and Peace, expressed concern that a new arms race could emerge with the treaty's failure.

"One of the questions fundamentally we have to ask is how do you justify this (potential weapons buildup) and at the same time go to the negotiating table with North Korea and ask them to get rid of their nuclear arms? Isn't this a contradiction in outlooks? Isn't it almost a double system?" Archbishop Broglio said in an interview at archdiocesan headquarters.

The archbishop and several disarmament advocates urged the U.S. to pursue diplomacy to preserve the treaty and other disarmament agreements. They explained to CNS that abandoning the treaty poses serious moral questions about the commitment to protecting human life.

The INF treaty is historic because it required the U.S. and Russia to eliminate all nuclear and conventional ground-launched ballistic and cruise missiles with a range of 310 to 3,410 miles and called for extensive on-site inspections for verification.

Notably, the U.S. has harbored concerns about Russia's compliance with the treaty since 2014. Then, President Barack Obama officially accused Russia of testing an intermediate-range land-launched missile in violation of the pact.

For its part, Russia has denied violating the treaty, but has suggested for more than a decade it might withdraw from the pact because it was prevented from possessing weapons that China -- which is not part of the agreement -- has.

Russia also has cited U.S. deployment of strategic anti-ballistic missile systems in Europe as a reason for its withdrawal, which it formalized a day after the Trump administration's Feb. 2 withdrawal announcement. Unless both parties come to the bargaining table the pact will be dead in six months.

The White House announcement followed by two weeks a Congressional Budget Office report that projects the cost of updating and maintaining the U.S. nuclear arsenal at $494 billion through 2028. The figure represents a $94 billion increase from the last CBO estimate in 2017.

The CBO cited inflation and the cost of more sophisticated equipment as reasons for the 23 percent increase it calculated.

If the program as outlined in the report is carried out it would be the largest nuclear buildup since the 1980s.

The news on both fronts soured Gerard Powers, director of Catholic peacebuilding studies at the Kroc Institute for International Peace Studies at the University of Notre Dame.

"The bottom line is it's excessive," Powers said of the projected expenditure. "In general, we are moving in the wrong direction on nuclear policy."

He predicted that the end of the INF treaty will cause Europeans to feel threatened should Russia deploy intermediate-range missiles on its western flank and the U.S. eventually follows with its own new system, which remains to be developed.

Powers said that the renewed deployments may lead to wider "mobilization" among Europeans in particular to oppose a new arms race.

The peacebuilding expert also expressed concern for the 10-year-old New START agreement that is set to end in 2021 unless Russia and the U.S. agree to a five-year extension. New START capped the number of deployed strategic nuclear warheads and bombs by each country at 1,550.

No talks on extending the treaty or to further reduce each country's nuclear arsenals are planned.

Meanwhile, Pope Francis has repeatedly condemned "the very possession" of nuclear weapons and has called for the world's nuclear powers to rid their arsenals of such armaments.

The Vatican also was among the first governing bodies to sign the 2017 U.N. Treaty on the Prohibition of Nuclear Weapons. The treaty emerged from member states frustrated with the slow pace of nuclear disarmament. In the final vote, 122 nations approved the treaty with Netherlands the only country to vote against it while Singapore abstained. Sixty-nine countries did not vote including all the nuclear weapons states and all NATO members except Netherlands.

Archbishop Broglio called for renewed attention to the U.S. bishops' 1983 pastoral letter "The Challenge of Peace: God's Promise and Our Response." The document was promulgated during a time of heightened tensions over the threat of nuclear war between the U.S. and Russia.

The U.S. bishops also have consistently questioned increased spending on nuclear weapons since the letter's publication. The bishops have echoed papal calls for diplomacy to take precedence over weapons production and for the nuclear powers to adhere to a no first-use policy in their military planning.

In the end, it may come down to local activism that pushes the nuclear powers to the negotiating table to head off any potential arms race. Massive numbers of people worldwide took to public demonstrations in the 1980s to urge alternatives to war.

Sister Patricia Chappell, executive director of Pax Christi USA and a member of the Sister of Notre Dame de Namur, urged people to educate themselves on how their tax dollars are being spent and to speak up if they disagree with a renewed emphasis on building nuclear arsenals.

"I think (these expenditures on nuclear weapons) goes totally against our Catholic social teaching," she said. "We need to be raising our voices."

Tobias Winright, associate professor of theology at St. Louis University, who has been involved in Catholic peacebuilding efforts, told CNS that people of faith can bring their voices to the churches, the halls of Congress and letters to the editor in calling for reducing the risk of nuclear war.

He pointed to Second Vatican Council's "Gaudium et Spes," the Pastoral Constitution on the Church in the Modern World, which expressed a vital need to minimize the likelihood of war, especially nuclear war.

"It's not just the responsibility of the bishops," Winright told CNS. "I do think we the people in the pews need to start participating much more in what the church is saying in regard to this question and not sit back and assume somebody else is going to handle it."