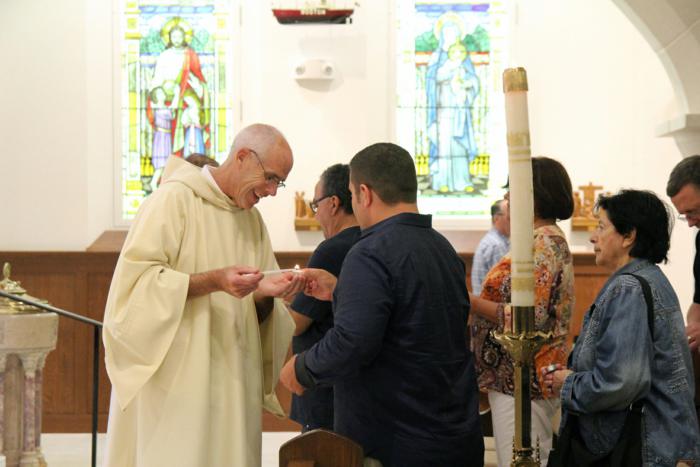 Deacon Paul Kline lights a worshiper's candle at the Shrine of Our Lady of Good Voyage, Aug. 18. Pilot photo/Jacqueline Tetrault

SOUTH BOSTON -- On Aug. 18 the Catholic community of South Boston continued its four-part series of monthly liturgies for individuals and families impacted by addiction -- those currently struggling with it, those recovering from it, and those who have watched friends or family members wrestle with it.

"These are four summer Masses to offer support, encouragement, and prayerful accompaniment to anyone whose life has been impacted by addiction," Paul Kline, deacon of the collaborative, told The Pilot.

"In the collaborative that I'm assigned to here in South Boston, the problem of addiction and overdose deaths has been severe," Kline said.

He reached out to the Father Mychal Judge Center for Recovery "to ask for their guidance, direction, wisdom, and what more we could do." He met the center's director, Anthony Andreottola. Together they decided to form a group "for people in recovery who wanted to explore their spirituality at a greater depth than traditional AA or twelve-step meetings might allow." That group met biweekly at St. Monica-St. Augustine Church for a year.

Andreottola told The Pilot, "It was pretty successful, we had a lot of people who talked about getting back to the Church and most of the people were Catholic and had a connection to recovery and spirituality, but weren't really attending church or using their background in faith to help them in recovery. We talked about different things we might do to draw people in and what the community needed and everything that was going on with the opioid epidemic in South Boston and downtown where it was affecting so many families and people were feeling a lot of pain and hurt. We just thought it might be time to try something different where we could celebrate recovery and the struggle, the fight, and also remember the people that have passed, to have a place where people can remember people who weren't able to make it into recovery."

Kline and Andreottola called extending their work with this group an "experiment."

Andreottola recalled, "I had a guy come with his whole family and we talked to him after and he said, 'Wow, I can go to church with my family, and my recovery is front and center, and it's being honored and respected.' He really liked that."

Speaking about the various priests and friars who have supported and participated in this endeavor, Kline said, "It's a wonderful experience of different voices, different ministers in the church coming together to offer this prayerful support and accompaniment."

The first two liturgies took place in June and July at St. Anthony Shrine. The third, on Aug. 18, took place at a different venue, the Shrine of Our Lady of Good Voyage.

Each service starts with a person in recovery sharing their story. On Aug. 18, Vinnie, who was involved in Kline and Andreottola's meetings at St. Monica's Church, briefly shared his experience.

"At certain points I'd reach crisis points. I'd speak with doctors and try to explain the way that I was feeling inside," he said, adding, "They didn't offer a particular solution."

Things finally got better, Vinnie said, when he met people who shared similar experiences and were able to articulate what he was going through.

"I listened to them describe the feelings that I had inside and tried to explain. They talked to me, they told me how I was feeling, (what) I was trying to describe to these doctors, and it was very powerful. I surrendered at that point and I found solace in the higher power who I call God and in the fellowship of other people who had experienced similar struggles."

The Aug. 18 Mass was celebrated by Father Steve Madden, formerly the pastor of St. Monica-St. Augustine in South Boston, now at Incarnation Parish in Melrose.

Before beginning the Mass, Father Madden invited attendees to light a candle from the flame of the shrine's paschal candle, which represents the presence of Christ in the world and in their individual lives. They placed these candles on the altar, where they remained flickering throughout the Mass.

"We come to tell our story," Father Madden said. "Whatever it is, the story that you have, whatever it is you hope for yourself ... that's what you're placing on the altar."

Kline gave the homily, expanding on the theme of story and sharing his own family's experience of excusing a relative's addiction.

"No one has a story quite like you. And our stories are not always pretty," Kline acknowledged.

He went on to say, "Addiction, like any illness, like any adversity, changes our life story. And some of the pages in our story that have been written by the disease can be very hard to read, some memories very painful to touch."

Kline said this pain, shame, and bitterness can make people try to run away from their stories and the realities of their lives.

"But not here," he said with conviction. "Here, in this holy place, there is no need to hide ... because here God opens his heart and welcomes every single word of our story, bitter or sweet."

Amy, who has spent 38 years in recovery, shared her experience at the July liturgy. After the Aug. 18 service, Amy told The Pilot, "I think this draws people into the service and makes them feel more comfortable with identifying as being in recovery, because there's so much stigma related to it that this seems to open the door for people to feel welcomed. So I think that's why I support this the most. I'm very much into wanting to reduce stigma around recovery."

One attendee, an employee of Massachusetts General Hospital, commented, "I think it's important, (because) we can feel kind of hopeless in the face of addiction; to realize that we can, first and foremost, gather and pray. It's good to be reminded of that."

The fourth and final liturgy in the series will take place on Sept. 15 at 7:00 p.m. at the Shrine of Our Lady of Good Voyage. The celebrant will be Father James Flavin, pastor of St. Monica-St. Augustine Church and episcopal vicar for the Central Region.