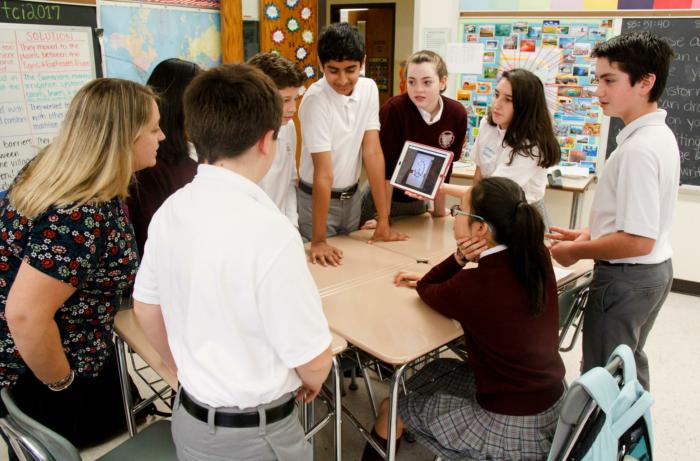 Students in one of the 'houses' of Blessed Sacrament School in Walpole, discuss ideas for a service project. Pilot photo/Mark Labbe

WALPOLE -- While Blessed Sacrament School in Walpole offers schooling for grades pre-k to eight, the school community is close, and relationships among the grades are being built and bolstered every day. According to Principal Jim Spillman, that's largely thanks to a fairly new program in the school -- the St. Francis House System.

Under the House System, implemented during the 2015-2016 school year, students in grades six to eight are assigned to one of six houses. Houses, each led by two eighth grade leaders and each named after a saint, meet regularly, and coordinate service projects and events. It also simply serves as a way from students from different grades to connect and create friendships.

The system, said Spillman, speaking to The Pilot Oct. 25 at the school, is "a good way for us to build community within our middle school program, to kind of break down the barriers that naturally exist between the different grades, and to promote more opportunities for leaders... and to promote service"

Houses are also tasked with creating and carrying out projects they can do with students in the younger grades.

Eighth-grader Mallory McCaffery is one of the leaders of "House JP II." Wearing a sticker proudly proclaiming Pope St. John Paul II's feast day, which took place only three days before on Oct. 22, she stepped out of a house meeting to speak to The Pilot.

She and those in her house work with a fourth grade class and a preschool class, and during the meeting, she said they were planning activities centered around peace.

"Working with the younger kids is really fun because you get to teach them new things and play with them," she said.

While the school year had just begun, McCaffery is already thinking about where she wants to go to high school, and how she needs to keep her grades up so she will be more likely to get into the Catholic high school she wants.

That type of motivation and maturity is not uncommon among the older students, said Spillman, who noted that many of the eighth graders move onto Bishop Feehan High School in Attleboro. While it's outside the Archdiocese of Boston, it is close to Walpole, and is a prestigious Catholic school.

They both began teaching at Blessed Sacrament School last year, and both took on leadership roles in the House System this year.

Running the House System "has been great," said Viano. "The kids are awesome, so it makes it, I think, easy."

Through the system, the students are "learning how to lead and are getting our perspectives as teachers as well," noted Trowbridge.

In essence, she said, they are learning to act "like mini-teachers," she said.

For eighth-grader Sasha Powers, a leader in another house, acting like a teacher is starting to become second nature.

"We have to make sure everyone is included," she said of her leadership role. "Even if they're one of the shy kids, they are able to talk in discussion."

She has learned to split students into smaller groups, so that they can more easily stay on task and stay organized. She likes the House System for what it has already taught her, and for the comradery she feels with the rest of the school.

"It's a great idea, because it really introduces you to the other grades and makes you feel like you have a place to be," she said.

It's a good way "to know the whole school."