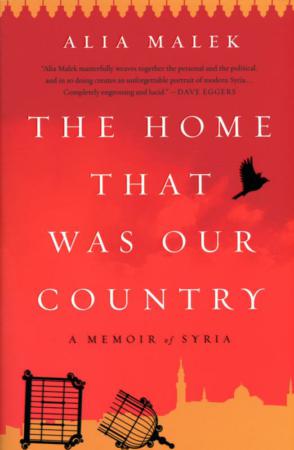 This is the cover of "The Home That Was Our Country: A Memoir of Syria" by Alia Malek. The book is reviewed by Regina Lordan. (CNS)

"The Home That Was Our Country: A Memoir of Syria" is as much an account of Syria as it is a beautifully crafted narrative of a Syrian family and an independent first-generation Syrian-American woman.

It breaks through the single-lensed generalizations and headline tickers and dives deeply into the lives of Syrians with stories that smoothly weave in and out of a complex political context. In sharing the stories of her friends and families, author Alia Malek is sharing the story of a nation.

The book is bracketed by Malek's quest to reclaim and renovate her grandmother's apartment in Damascus, which had been taken in 1970 from her family by an obstinate tenant protected by lopsided laws. Malek, a Christian whose parents' professional careers as a physician and pharmacist lead them to settle in Baltimore, had long had a nostalgic desire to return to her parents' homeland to which she was exposed during long visits with family as a child.

Malek shares accounts of the apartment building's tenants and her expansive family. They are a diverse blend of Muslims, Christians and Jews, living and socializing together, tending to each other's children and sharing apartment upkeep and gossip. Their lives intertwine and disperse as children and grandchildren get older, marry and many times leave Syria for Europe and the United States.

Malek starts her family story with her great-grandfather, a powerful and wealthy landowner from Hama with influential ties to power players as well as to women other than his wife. Her grandfather's influences shed light on some of the nuances of the connections between power, politics and culture within a family and broader society. Malek's great-grandfather's style and personality influenced Malek's grandmother, a brazen, independent and savvy woman.

In the backdrop of these intimate stories of familial relationships bonded and broken due to legal and cultural customs regarding inheritance and tradition, the Ottoman Empire fell, and with it the Syrian version of collective nationalism. Picked apart and used as war loot for Western victors, Syria fell victim to French occupation, modern-day influences of strict Islamic law adopted from Saudi Arabia, diaspora to the West and the rise to power of the Assad regime in 1970.

Under the regimes of President Hafez Assad and his successor, son Bashar Assad, Malek constantly faces an internal battle.

Among Syrian citizens resides the pervasive, albeit obnoxiously obvious, "mukhabarat." The "mukhabarat" is a body of four different security forces that work as informants to provide surveillance for the government. Their presence is felt constantly, tainting any ability to freely talk in public about anything other than hushed cliches.

Is Malek a victim, forced to remain quiet about the injustices she sees so as not to put her and her family at risk of arrest? Or is she complicit in the narrative that Assad is projecting to the world -- that protesters are foreign puppets or, worse, terrorists?

Malek questions herself as she watches cleverly orchestrated pro-Assad demonstrations out her window. She mulls over this impossible state of affairs as she hears of arrests, disappearances and murders of fellow Syrians.

She listens to her family members discretely wonder where they all fit into this. Christians, they are neither protected by the Assad regime nor by extremist Islamists. The priests seem to support Assad to keep the minority community safe, but, as Malek considers, is that representative of the model of Jesus?

"The Home That Was Our Country" challenges readers to think about these and other contradictions in human nature and history.

Can double parallels exist in history, wars, human nature and identity? Can someone be noble but dishonest like Malek's great-grandfather? Can U.S. foreign policy be wrong while American ideals something to idealize? Can someone be brave and terrified at the same time? Can someone be simultaneously concerned about evil and yet complicit in it?

Lordan has master's degrees in education and political science and is a former assistant international editor of Catholic News Service.