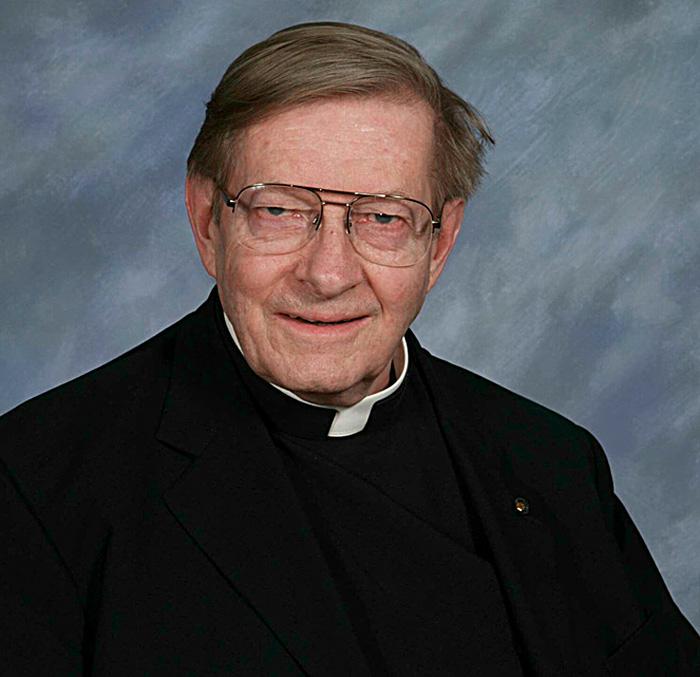 When he was growing up in Arlington and attending St. Agnes School, he probably never dreamed that he would be a major contributor to building bridges and bringing peace to some of the most troubled spots of the world, but that is the legacy of Father Raymond Helmick, SJ who died at the Campion Healthcare Facility in Weston on April 21.

The middle child and first son of the late Raymond and Alice (Clancy) Helmick, his older sister Marie Barry lives in Peabody and his younger brother, Msgr. William M. Helmick, is pastor of St. Theresa of Avila Parish in West Roxbury. Recently Msgr. Helmick underwent surgery and at the generous invitation of the Jesuits he was invited to post-operative recovery at Weston so he could be with his brother Ray whose health was rapidly declining. Msgr. Helmick will continue his recovery at Weston.

After elementary school at St. Agnes, Raymond went to Boston College High School, in those days still at the old South End campus. Following graduation he entered the Jesuits at their novitiate in Lenox on his 18th birthday, Sept. 7, 1949. Illness interrupted his novitiate, but he resumed his Jesuit formation and following philosophy studies at Boston College and theological studies in Germany he was ordained to the priesthood in Frankfurt, Germany on Aug. 27, 1963. While a scholastic (1957-1960) he taught school in Jamaica and returned there following ordination from 1965-1967.

In 1967 he went to Fordham University and began advanced theological studies at Union Theological Seminary in New York. He was clear that his theological studies, and especially his biblical study lead him to practice and theory of conflict resolution.

From 1972 until recent months he was personally involved in negotiating peace accords in some of the most troubled areas of the world: Belfast, Northern Ireland; Lebanon, Syria, Israel, with the Palestinian Authority; Baghdad, Iraq; Croatia and Bosnia-Herzegovina -- a litany of the late 20th and early 21st centuries' "hot spots."

At the same time he was professor at Boston College in "Conflict Resolution" in the School of Theology.

His interest were not limited to his academic or professional fields only. He had always had an artistic and musical side. Once he fashioned his own harpsichord. A familiar face at liturgies at St. Theresa Parish where his brother is pastor he is also known there for two splendid art works, again fashioned by his hands. The outstanding "Eucharistic Tower" in the Blessed Sacrament Chapel at the West Roxbury Parish, it was featured as the cover of the 1995 Boston Catholic Directory; more recently he completed a mosaic mural of the healing miracles of Jesus on the wall of the handicapped ramp of the church.

Father Helmick's funeral Mass was celebrated at Holy Spirit Chapel, Weston on April 26. Father Robert Levins, SJ the superior of Campion Center was the principal celebrant; since Msgr. Helmick could not preach, though he was there as concelebrant, Father Levins read the homily written by Msgr. Helmick. There were 42 concelebrants; among them were Jesuit Fathers Terrence Curry and George Winchester; among the archdiocesan priests concelebrating were Father Robert Blaney, Sacred Heart and Our Lady Help of Christians, Newton; Father Charles Higgins, Mary Immaculate of Lourdes, Newton; Msgr. Joseph Lind and Father John Nichols, senior priests of the archdiocese; and Father Peter Nolan, CSSp.