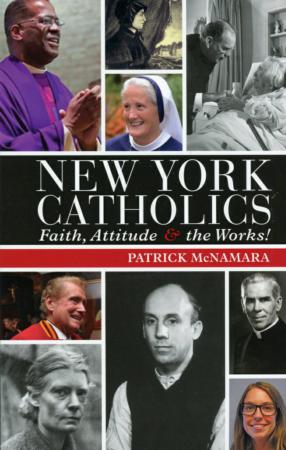 This is the cover of "New York Catholics: Faith, Attitude & the Works!" by Patrick McNamara. The book is reviewed by Rachelle Linner. (CNS)

Patrick McNamara, lifelong New York Catholic, historian and teacher, has written a wonderful tribute to the uniqueness and vitality of a most distinctive Catholic milieu.

"New York Catholics" is imbued with love, respect and admiration for the abundant generosity of 42 historical and 34 contemporary Catholics. McNamara's subjects -- administrators and journalists, priests and bishops, contemplative nuns and lay activists -- illustrate the manifold ways the gifts of the Holy Spirit are used to build up the church.

There is an expansive, exuberant and ecumenical sensibility to New York Catholicism that is evident in the lives of people profiled in these pages. These two- to three-page essays are not generic litanies of accomplishments, controversies and motivations. Instead, McNamara's succinct and richly textured narratives manage to convey the context, and complexity, of a person's life and commitments.

This book illustrates the depth of New York Catholicism and the sheer pleasure people take in being part of this community.

To be a Catholic New Yorker, McNamara writes, is "to know that you're part of something bigger than yourself ... in both the geographical and theological sense." The churches in the borough of Queens ("over a hundred nationalities speaking some 138 languages") "have been described as a 'second Pentecost.'" It is this extraordinary influx of peoples that bestows the special charism of New York Catholicism, its hospitality in giving welcome to the newcomer.

The charism of hospitality is explicit in the well-documented and appreciated lives of Dorothy Day and Catherine de Hueck Doherty, both of whom are now servants of God. As a seminarian, Msgr. Bryan Karvelis, who died in 2005, spent a summer working with Dorothy Day and recognized, "This is gospel poverty. This is what I don't see elsewhere. This is what I want."

An "organizational dynamo" and "deeply contemplative man," Msgr. Karvelis spent 50 years as pastor of Transfiguration Parish in the Williamsburg section of Brooklyn. He moved into an apartment and turned the five-story rectory into a residence for homeless immigrants and the convent into an AIDS hospice. "By the early 1990s, there were somewhere close to 100 people living on the grounds of the parish facilities," among them many immigrants who entered the U.S. illegally, writes McNamara. "'No person,' Msgr. Karvelis contended, 'is illegal in the eyes of God.'"

The mission of some people emerged from the ashes of their own suffering.

Helen Travis (1930-2000) was a widow, a recovered alcoholic and the mother of two sons who died because of drug abuse. After she regained sobriety she opened a halfway house in the South Bronx for "a tough group: addicts, pedophiles, rapists and murderers. If they were tough, she had to be tougher." "I try to do for other people's sons what I didn't do for my own. It's a second chance."

Sister Mary Lanning spent 13 years as a cloistered Dominican in the Bronx. One night she found herself praying, "Give us courage to let go of the good things we've been doing so that we can see the things we need to do."

Shortly afterward she left the monastery, entered the business world and founded a volunteer organizations, Harlem's Yes!Solutions. A "highly regarded advocate," she deflects praise and media attention. She firmly insists that "other people's poverty, pain and embarrassment is not a spectator sport."

No matter what their distinct vocations, each one seems to have had a unique sensitivity to God's call. Many stories echo the experience of Mother Mary Walsh (1850-1922.) "In the summer of 1876, in the slums of Manhattan, 26-year-old Mary Walsh, an Irish domestic servant, was approached by a young girl desperate for help. The girl's mother was sick with fever and her father was in jail. Mary Walsh did something most people wouldn't do; she started begging on the streets for the girl's family. She nursed the mother back to health and helped the father find work when he got out of jail. In the process she lost her own job but found her life's work."

Marilyn Santos, who is with the Pontifical Mission Societies in the United States, "sees God at work throughout this city." "Where doesn't he work? If we don't find God, we aren't looking well-enough. In a city like this, how can you not, if you're really looking?"

The gift of this book is that it allows us to see God in the vibrant stories of an extraordinary city and, by extension, helps us see him in the many and varied places where we live, work and worship.

Linner, a freelance writer and reviewer, has a master's in theology from Weston Jesuit School of Theology.