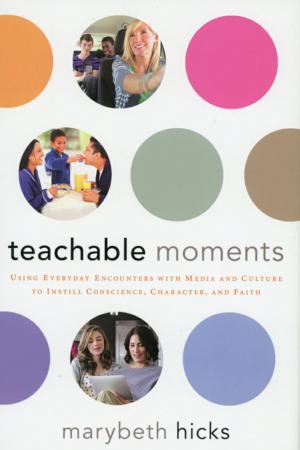 This is the cover of "Teachable Moments: Using Everyday Encounters with Media and Culture to Instill Conscience, Character and Faith" by Marybeth Hicks. The book is reviewed by Agostino Bono. (CNS)

For middle-class Catholic parents clueless about methods for incorporating moral values into their children's upbringing, "Teachable Moments" can provide a start.

For those having already dipped into the grab bag of self-help literature on dealing with pre-teens and teens in today's multicultural and digital social media world, the book may seem to belabor the obvious at best and grind some political axes at worst. The good news is that it outlines a workable approach for how to present moral and character-building lessons to kids.

Spoiler alert: Author Marybeth Hicks is a cultural warrior much closer to Bill O'Reilly than Bill Maher with her views woven into some of her parenting advice. Those sharing her side of the battle line will find the book of much more practical value than those on the other side or those trying to evaluate situations on their own merits.

So if you have no problems with sporadic insertions criticizing too much influence on society by a gay-lesbian agenda, lamenting that American patriotism is being erased by emphasis on multiculturalism and diversity, and that the Occupy Wall Street movement is a sign of bad parenting, dive right in. If not, you can still follow her approach, plugging in your own content and context for how moral and behavior issues should play out in your children's lives.

"Teachable Moments" is a method in which parents use concrete situations kids face to teach moral, behavioral and character-building lessons. It's nothing new. The method goes back to Genesis when God asked Adam, "Where are you?" when the first human went into hiding after eating the forbidden fruit. It has been used by generations of educators and parents.

Hicks tells parents to use such moments to teach short life lessons, inviting kids to discuss these at length in a more relaxed atmosphere. Her book provides sample situations and suggests what to say to impart a message. She takes on such issues as sexual purity before marriage, drugs, drinking, abortion, the emphasis on sex and violence in today's media, bullying, and how to use and abuse social media.

When not pushing a culture war agenda, Hicks provides some common-sense lessons based on Christian moral values. Such is the case when discussing sports as she takes on overly aggressive parents more interested in seeing their kids win than in promoting values of honest competition and fair play.

Hicks has written several previous books on parenting in today's culture and draws from her practical experience as a mother of four. One important issue lacking in her book is sex abuse of minors. Predators are found in schools, athletic activities, youth organizations and social media. Yet she does not raise the issue of how to inform youths of the possible dangers lurking where they routinely gather.