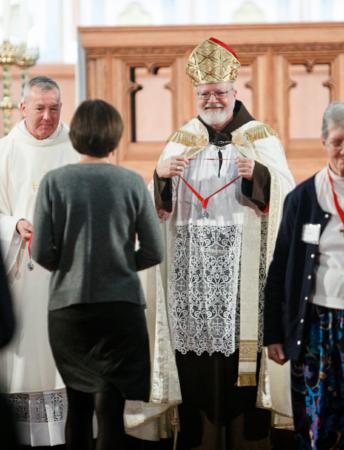 SOUTH END -- Without the work of dedicated men and women like this year's 116 Cheverus Award Medal recipients, the mission of the Archdiocese of Boston would grind to a halt, Cardinal Seán P. O'Malley said at the Nov. 23 vespers prayer service on at the Cathedral of the Holy Cross to present the awards.

First presented in 2008 at the celebration to mark the conclusion of the archdiocese's bicentennial year, the award is presented each year on the Solemnity of Christ the King to recognize dedicated service to the Church and God's people, with an emphasis on those who serve in a quiet and often otherwise unrecognized fashion.

"It is a great way for us to remember just how blessed we are in the wonderful people that make up this archdiocese," the cardinal said in his homily.

Each year the pastors of one-third of the parishes in the archdiocese are given the opportunity to nominate an award recipient. The nomination is then forwarded by their area vicar, and approved by their regional bishop and Cardinal O'Malley. Some recipients are also personally selected by Cardinal O'Malley.

"The Cheverus Medal is named after our very first bishop here in Boston. He was an extraordinary man," Cardinal O'Malley said.

The oval-shaped medal of sterling silver bears the likeness of Bishop Jean-Louis Lefebvre de Cheverus, based on a portrait by Gilbert Stuart.

In his homily at the vespers service, Cardinal O'Malley explained that after surviving imprisonment during the French Revolution, Bishop Cheverus came to the United States at the invitation of the only priest in Boston, Father Francis Anthony Matignon.

"Between the two priests they ministered to all the Catholics of Boston and the whole region, including the Indian tribes of Maine," Cardinal O'Malley said.

In 1808, the Boston Diocese split off from Baltimore, with Bishop Cheverus named as its shepherd. He led the newly-created diocese from 1808 until his return to France in 1824.

"Under his direction, the Irish immigrants began digging the foundations of our first cathedral on St. Patrick's Day in the year 1800," Cardinal O'Malley said.

The cathedral was replaced, shortly after being raised to the status of cathedral, because the population of Catholics exceeded the size of the space. Originally called Church of the Holy Cross, it was replaced in 1862 by the current Cathedral of the Holy Cross where the original church altar rests in the crypt.

"John Carroll, the first bishop of the United States, consecrated the church that cost about $16,000. You got a lot of bang for your buck in 1800," he said.

Bishop Cheverus died in 1836 as the Archbishop of Bordeaux.

"Bishop Cheverus was a hard-working and holy priest who won the admiration of all, Catholics and Protestants alike," Cardinal O'Malley said.

The original cathedral was built with many donations from the Protestant community in Boston, and Bishop Cheverus helped choose the motto for the city "sicut patribus, sit deus nobis," which now appears on City Hall.

"It means, 'May God be with us, as he was with our ancestors.' From a tiny group of poor immigrants and Native Americans, our archdiocese has grown to about two million Catholics in 200 years," Cardinal O'Malley said.

He again congratulated those who received the award as he ended his homily.

"Fittingly enough, the Feast of Christ the King always comes around Thanksgiving, the greatest American celebration that recalls the first settlers to New England and their desire to thank God and share their blessings with each other. At the top of our list of blessings come the extraordinary individuals who are this year's Cheverus Medal recipients," he said.

Award recipients who spoke to The Pilot said they felt honored to be recognized for their efforts on behalf of the Church.

Among them was Kam Sylvestre, a coordinator for Haitian communities at Our Lady of Grace in Chelsea, received the recognition for his service to the parish coordinating with the people there and the Haitian Apostolate.

"I feel appreciated for the service I do with my people in the Church, and I am very grateful for all of them who think of me," he told The Pilot after the service.

Paul Roche received the Cheverus Medal for his work helping his pastor, Father Kenneth C. Overbeck, as the community came together to build a larger church -- completed in January.

"It's an incredible honor. We spent four years of hard work building a new church down at St. Bonaventure's, and this on behalf of the whole parish recognizes the accomplishment," Roche said.

"I have told him repeatedly, and he always shrugs it off in modesty, that there would be no church if there was no Paul. He helped me every step of the way," Father Overbeck said.