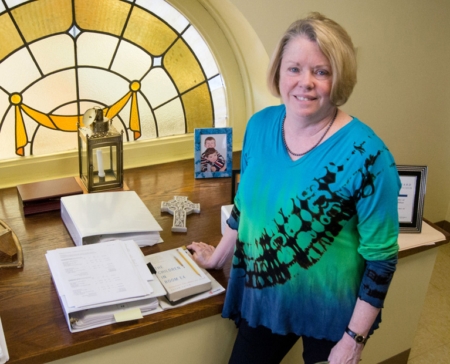 DORCHESTER -- In a tough economy where just working a job doesn't always cut it, St. Mary's Center for Women and Children works to restore dignity by helping women, children and families achieve economic self-sufficiency and stability.

"The goal and mission is to really look at families in a holistic way, and understand in order for them to be able to be self-sustaining and free of trauma, prejudice and bias that we need to attend to three primary needs, which is their emotional and spiritual, their educational, and their economic stability. We address all three of those areas," St. Mary's president Judy Beckler said Nov. 1.

Beckler gave The Pilot a tour of the 120,000-square-foot facility re-developed from the former St. Margaret's Hospital in 1993.

In her over 16 years as president, Beckler said the facility has sheltered 2,000 homeless families, cared for 300 parenting teens and their infants, comforted more than 1,000 child victims of abuse and neglect, and equipped 700 women with education and work skills.

Beckler said the aims of the program continue the tradition begun by the Daughters of Charity after an abandoned baby was discovered on the steps of a Boston church in 1870. The Daughters established St. Ann's Ward at Carney Hospital, then located in South Boston, to provide shelter, comfort, and care for other abandoned babies. Four years later, with the growing demand for services for women and children, St. Mary's Infant Asylum and Lying-In Hospital was established on Bowdoin Street in Dorchester.

In 1894, the St. Mary's purchased the Green estate on Jones Hill in Dorchester and moved operations to the location near Uphams Corner.

The current center took up residence at the old St. Margaret's Hospital in 1993 when all services at the hospital moved to St. Elizabeth's Medical Center in Brighton.

"We are almost 20 years old, and when St. Margaret's closed and moved its services over to St. Elizabeth's Medical Center, there was nothing here except 10 pregnant and parenting teens in a residential program," Beckler said.

Next year marks the 20th anniversary of the new facility whose motto is, "Change comes from the center."

"As we have done scans both state-wide and nationally, this unique collection and continuum of programs, we have not seen any other like it," she said.

The staff at the center makes a priority of empowering those who require services through training, education and practical skill development.

The facility houses and transitions 95 families per year, as the families and the support team at St. Mary's work through the programs at the facility developing a plan to get families back on their feet and able to provide for themselves. These goals include helping family members gain access to the workforce, reach for academic attendance and success, and obtain permanent housing.

"For them to start to think about how they will get their own needs met and meet the needs of their child for a lifetime, they come with courage and resiliency that is really inspiring," Beckler said.

Children who have been removed from their homes and have experienced trauma receive shelter and solace through the Bridge Home program. Whenever possible, the staff works to restore children to their homes, families and communities after comprehensive child and family assessments. Beckler said the center works with the Massachusetts Department of Children and Families.

"The goal really is to help the department make a good decision with the family about where the child will go next. And that is an assessment that lasts over 45 days. It is very intensive," Beckler said.

The St. Mary's Home program keeps homeless pregnant and parenting teens on a track toward educational, vocational and personal goals, while they learn to cope and manage the responsibilities carried by a young parent.

"We are not looking for minimum-wage jobs as a pathway out of poverty. It won't happen. So, what we have done is to be very intentional about designing a program that allows women to learn the skills they need to apply to a job in industries that are successful and thriving in the Boston area," she said. She cited healthcare, real estate, higher education and financial services as fields of concentration.

Learning programs at the center push to give women who are homeless or low-income workers further opportunities through increasing basic educational skills, learning the behaviors required to find a job, and the ability to pursue educational advancement such as a GED. Beckler said learning opportunities include resume development and interviewing skills to help find employment that can sustain a family.

"Charity is important, but this is not about charity. This is about giving people an opportunity to have access to a quality job that has the possibility of supporting a family," she said.

Beckler said St. Mary's Center for Women and Children has worked hard over the years to maintain their Catholic identity.

"At the heart of it, it is about justice. I think from the trustees' perspective, from the senior leadership's perspective, there has been a strong commitment to not only provide but to advocate for justice for women and children. So, that has just felt like a good fit," she said.